250 competitors to take the start line for Iron Maori 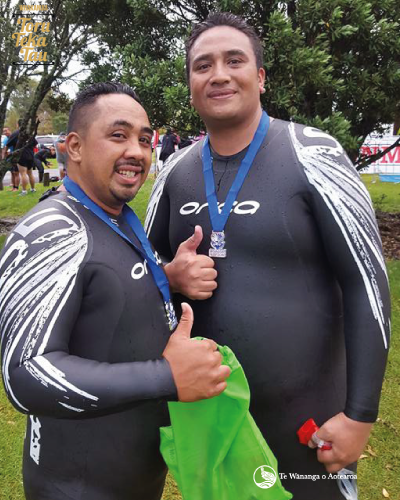 April 2 was a day of firsts in Te Ihu; Iron Māori for Tamaki, Te Wānanga o Aotearoa as a key sponsor of the event and kaimahi Aaron Henare and Tumatawhero Tihi as competitors.

For the pair, both 31, it was a significant milestone.

“I can swim now,” says Aaron, who couldn’t two weeks before the race.

Meanwhile, Tumatawhero set new records he looks forward to crushing in the future.

The kaiako were among more than 250 competitors to take to the start line for Auckland’s inaugural Iron Māori event held at Umupuia in Maraetai this month.

Aaron’s partner Desrae had done two half Iron Māori in Napier and was a great support, teaching him at the Papatoetoe pools and helping him prepare psychologically when he first found out it was sink or swim.

“Going from a spectator to participant is a whole different field. Size doesn’t matter, age doesn’t matter, it’s all about giving it a go. I can definitely see a wānanga group coming through,” he says.

Already big on the “hauora kaupapa” since this time last year, Aaron’s dropped sizes clothing-wise and feels like he has more to give to his mahi, his tauira and his whānau.

Tumatawhero says although the wetsuit took some adjusting to, overall he was pumped.

“It was great and the event itself was awesome. I didn’t think I was capable of doing it but our coach Kingi Peterson said a few encouraging words and from then on I started training.”

Like Aaron, Tumatawhero started incorporating gym work-outs into his daily routine last year and has already filled this year's calendar with more events, including Crossfit, Tri Māori and traversing the Hakarimata range – not to mention beating personal bests.

“If I go back to November 2015, I looked a lot different. I feel good now, I’m not tired all the time and I think I’m looking pretty good too. As part of Tau Ora I’d definitely encourage an Iron Māori team for next year.”

There were plenty of vouchers and spot prizes to be won on the day but a very special reward was seeing Tauira Registry administrator Sally Ash at the finish line, cheering her co-workers on as an event co-ordinator.

Sally says as Iron Māori grows every year it was great to see it finally make its way up to Auckland.

“I was one proud Mama seeing my work colleagues participating. They did amazing.”