Olympia stage beckons after mum time with the tamariki 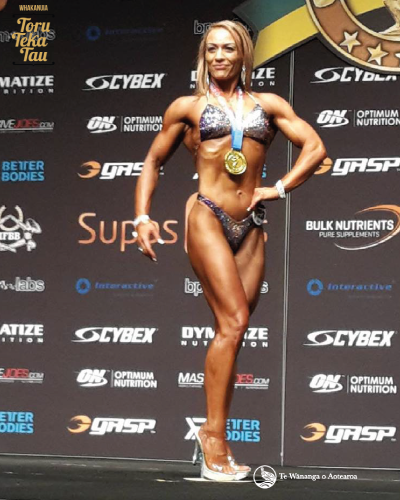 After a gruelling gym and training regime and a constant diet of chicken, fish and broccoli, champion bodybuilder Janna O’Malley could have been forgiven if she wanted to chill out and binge on Netflix with a burger, fries and a coke.

But having just won the Arnold Classic in Melbourne, the national programme manager for Te Wānanga o Aotearoa went for the more spartan-like option.

“I was up early and I was off to the gym to do my cardio. It is something that is so ingrained now that I don’t know any different. It’s in my blood now.”

“I also didn’t go overboard with what I ate, I just had an egg on toast with some spaghetti and salt in it, ha ha.”

Janna’s ascent in the world of bodybuilding continues with her win in the masters class of the New Zealand International Professional and Amateur championships followed by her mid-March win at the “Arnold’s” in Melbourne.

It was her second visit to the Arnold Classic having placed sixth last year and her victory has propelled her ever closer to her ultimate goal of competing on the Olympia stage.

Despite her ongoing success in a sport she has only competed in for the last three years, Janna was still floored by her latest result.

“I was told I was in the final six which was two rounds of posing, followed by the final judgement.”

“The rounds are short and sharp and you have to hit it because you only get one chance. Generally they hold you in a particular pose and that is excruciating, sometimes for two minutes while they talk among each other and allocate scores.”

“But when they called out the second place getter I knew right then I had won. It was a very surreal moment. Internally I was crying, I was so elated. I had no expectations going in to the show other than knowing I had done all I could do and I was happy with the package I was about to present. I was at the mercy of the judges on the day.”

The mother of three will now compete on the international stage in a points-based system to get to Olympia, held in Las Vegas.

“To gain points you need to place in the top three, if you win an international show outright that is automatic entry. 15 points gives you entry in to Olympia,” she said.

“But I haven’t planned for Olympia yet. I want some down time and I really want to give some time back to my kids. I want to be a good mum for a while and reground myself with them.”

“I can’t see myself doing enough shows by September to get to Olympia by October and to be honest I know I have a bit more work to do to get my body to where it needs to be. A longer timeframe will be to my advantage so probably not this year but definitely 2017.”

“I need to do a whole lot of things including getting sponsorship but this win has been a life changer - a definite game changer for me.”