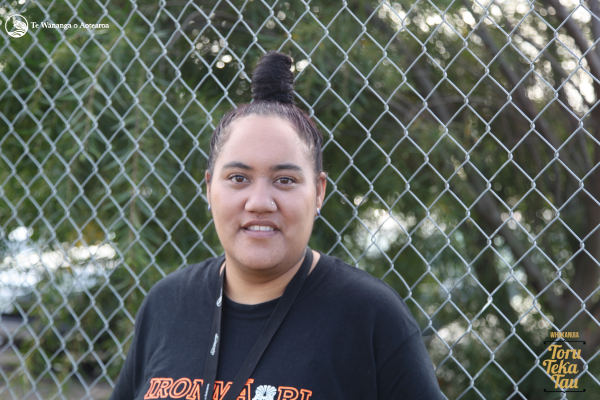 He Kāwai Raupapa kaiako Lindsey Puaawai Kahi (pictured above) says inmates were respectful and made the most of the programme.

A Te Wānanga o Aotearoa programme is reconnecting Māori inmates with their culture.

He Kāwai Raupapa, an introduction to the rich traditions of Māori performance arts, was offered to 24 prisoners at Kohuora, Auckland South Corrections Facility.

The 20-week programme put the spotlight on these first-time tauira two days a week.

The result was a full performance kapa haka bracket (with the exception of poi) for final assessment under the tutelage of Lindsey Puaawai Kahi and Tumatawhero Tihi.

This tono presented new challenges for the tauira aged in their late teens to 60s and two kaiako who were new to working in the prison environment.

“It was quite nerve-wracking at first. I was overwhelmed to begin with because it was a big group of tauira,” recalls Lindsey.

"I was pretty anxious but they were really respectful of me as a woman and a kaiako, and they definitely listened. Because time is quite precious, they made the most of it.”

The course allowed the men to explore their culture and they became aware that they knew more than they had given themselves credit for.

“Literacy was an issue, so I’d asked them, ‘What is manawhenua?’ and they’d talk about it. A lot grew up on the land with grandparents, fishing, diving, pig hunting. To them it’s pretty much what you live and breathe,” says Lindsey.

The command of basic te reo improved with kōrero around whakapapa, myths, legends and waiata compositions.

Basic performance skills were reiterated too; keeping still, having focus, being present, not laughing. Despite the hard work, there was plenty of laughter, says Lindsey.

Last month the roopu delivered their waiata tira, whakaeke, waiata ringa, haka and whakawātea, with a 100 percent pass rate to an appreciative audience.

“There were some very proud whānau that day. Some of the mums didn’t even know their sons could sing,” Lindsey says.

The focus of Kohuora is on reducing reoffending by enabling closer contact with family.

Te Wānanga o Aotearoa has built a good rapport with Corrections and is excited to continue the programme with another semester.

Tikanga-oriented programmes are fundamental to successful engagement with Māori prisoners and this will be further supported by a number of key activities to increase our cultural responsiveness.”

Executive Cultural Adviser Joe Wilson said Serco supports the men having the opportunity to strengthen their cultural identity through knowledge and experience.

“We know that growing one’s cultural identity exposes our men to the accountability to the collective, improving their personal and the community’s overall wellbeing, which in turn reduces their risk of reoffending..”