Daughters for the return home to Te Wānanga o Aotearoa 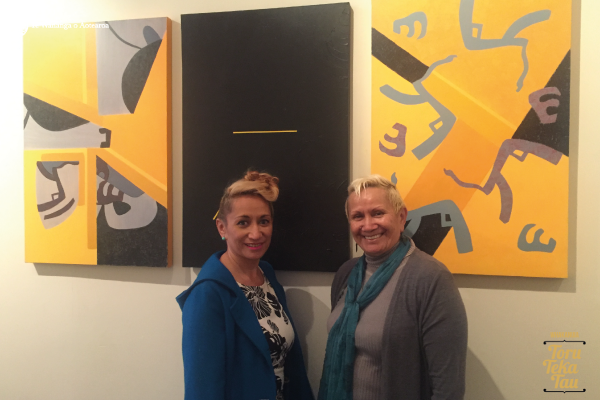 Two generations of the same whānau have returned home from different parts of the world to undertake study with Te Wānanga o Aotearoa.

Oriwa Morgan-Ward and her mum Rose Morgan are both tauira with Te Wānanga o Aotearoa after both spent long stints overseas.

The pair are following artistic paths – Oriwa is studying rauangi (painting) through the Maunga Kura Toi programme held in Hastings.

Mum Rose is studying raranga through the Maunga Kura Toi programme in Rotorua.

Oriwa was born in Tokoroa, raised in Australia and spent 15 years living in the United States.

While the mixed media artist had always had a passion for fibre arts and fashion design, she says her creative endeavours didn’t kick in until she was living in the American midwest and she became involved with a co-operative art studio in Winchester, Ohio

On returning to Aotearoa in 2013, she experienced what she said was a strong pull towards reconnecting with her iwi and tūrangawaewae.

She said she was compelled to learn at Te Wānanga o Aotearoa “because it is Māori based”.

“I was ready for a change in a learning institute and found it here,” she said.

She is currently displaying some of her art at Te Awamutu museum as part of the Pou Matariki exhibition and plans further study in rongoā next year also with Te Wānanga o Aotearoa.

Rose was part of what she said was the first Māori migration to Australia in the 1970s, leaving Wellington for Sydney to support her husband who was a guitarist in a band called Collision that played alongside the likes of Dalvanius Prime.

She eventually began learning taaniko and weaving in Australia under the tutelage of Fanny Mikaere – although it didn’t come easily to her.

Rose came back to Aotearoa five years ago after “getting a call to come home”.

She now lives in her whānau home in Putaruru.

“I have another year to do with my bachelor’s degree and it is very interesting - it opens a lot of other doors.”

“I would love to teach the young women. I see a lot of them doing nothing when they could be gathered in the marae and teach them how to weave, get them doing something with their hands and minds.”