From the marae to the motu via a Matariki postage stamp 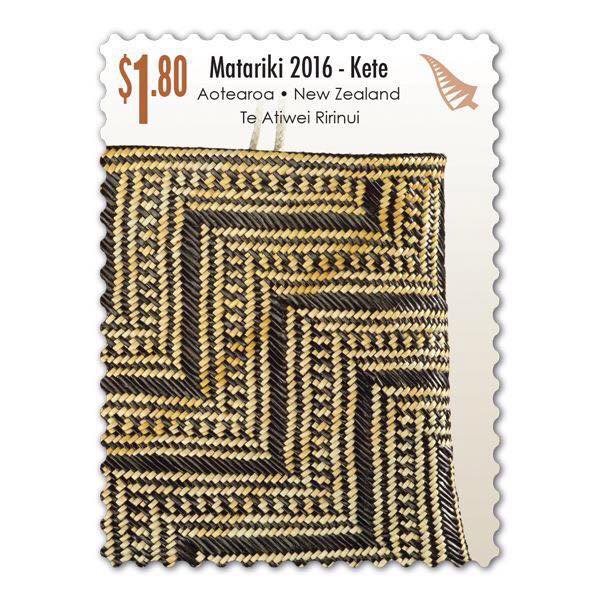 While his cousins were playing bullrush or getting into mischief around the marae, a young Te Atiwei Ririnui spent hours alone harvesting harakeke and evolving his weaving skill.

An Applied Indigenous Knowledge tauira studying at Te Wānanga o Aotearoa ki Mangere, Te Atiwei first learned the art of raranga from his koroua whom he watched splice ropes and tie knots and plaits when he was eight years old.

“One day he was putting up a clothesline for my mother doing all of these things and that was my introduction to mahi raranga,” he said.

“It was just a continuation from there. I spent a lot of time in the pā harakeke as a child while my parents were preparing the kai in the whare kai. I would be out practising and refining my skills in whiri which my koro taught me.”

The weaving skill of Te Atiwei has since been recognised nationally through numerous exhibitions and weaving gatherings.

One of his latest works Kete even features as a $1.80 postage stamp for the New Zealand Post Matariki 2016 series.

Explaining the meaning of his work that features in the NZ Post series, Te Atiwei said there was “a hononga which the poutama pertains to Matariki”.

“It’s not only the celebration of the Māori new year, it celebrates mātauranga, growth and the metaphors within ngā kete o te wānanga which embodies the whole of matariki.”

Te Atiwei (Ngāti Ranginui) says in his more than 20 years weaving others often broach the subject of him being a male weaver, something he doesn’t consider unusual.

“This is just the rebirth of something that had been lost for many generations.”

“Raranga was practised by men many generations ago. I’m just trying to maintain that knowledge so I don’t see this as unusual - but as history repeating itself.”

“Raranga whakairo has a lot of challenges in the mahi which I don’t get bored of.”
“I have done the poutama pattern for the last 10 years now and have practised it and for some reason I can’t get enough of it.”

“It has five different patterns within the pattern which you are interchanging with and every time you get so far up the kete there’s the tension and there’s the pattern that you have to be mindful of.”

“It has taught me that the pattern will always determine the size. It has its own structure that you can’t change – it’s either done that way or it’s not done at all.”