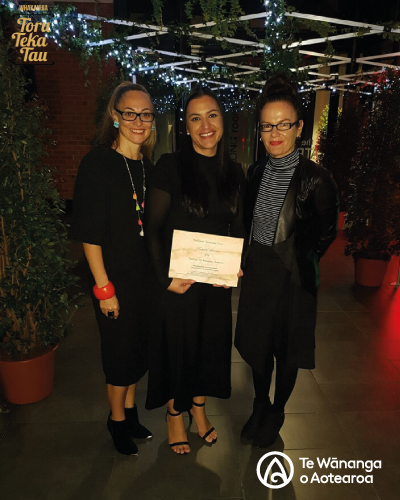 Tau Ora, the holistic health and wellbeing programme of Te Wānanga o Aotearoa, has added another award to an already bulging trophy cabinet.

Tuihana Ohia, who is subject matter expert wellness at Te Wānanga o Aotearoa said the award was the first Tau Ora had received without having to submit an application.

“It is actually like a community award, recognising those in the community who are making a difference,” she said.

“So this award has a lot of meaning to it because we normally have to put in submissions and a lot of writing.”

Tuihana said while Tau Ora already had a healthy relationship with Tri Māori, there was a lot of potential for the two to work together on hauora and wellbeing.

She said Tau Ora was also looking at increasing its presence in the community.

“We are already sponsoring events like waka ama and if you look at the calibre of people who attend the event they’re pretty fit so it’s a nice fit for Te Wānanga o Aotearoa to be in with that event.”

“And Polyfest, you know health among Polynesian people and obesity is not great so we are looking at opportunities not just externally but with sponsorships we have at the moment.

Tuihana said the level of Tau Ora engagement among TwoA kaimahi was slightly down on previous years.
But the quality of the engagement was much higher.

“Funnily enough, we have about 650 staff participating this year and  that’s not as high as we have normally had but the quality of engagement is better.”

“I’ve been around the takiwā and head office, and you really notice it’s more about quality versus quantity this year. We are moving into a new space and it’s really exciting.”