Whānau face their fears through on stage performance 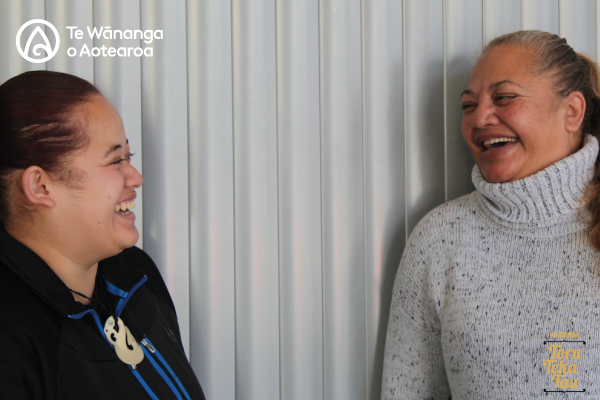 Robynne Anaru has found her cure for overcoming stage fright.

The 55-year-old is currently enrolled in the Certificate of Māori Performing Arts along with her daughter Ataahua and daughter-in-law Shaylani.

They found out about the programme through her son Wilson and niece Courtney who were in the class, tutored by William Davis, last year.

"We get scared to do things, we don't like to go out there in front of everyone,” says Ataahua.

"My brother was very shy and I watched him go from being hidden in his paua shell to 'the world is my oyster'. We watched one of his performances and we nearly cried just seeing how he changed."

Although Robynne is convinced shyness runs through her Whānau-ā-Apanui blood, she couldn't help but get inspired by Wilson's transformation.

As a youth worker, Robynne says it was past time to get over her fear of public speaking. So when Ataahua and Shaylani encouraged her to do the course with them she said; "Well if it made your brother like that then I'm all for it!"

"I find it hard to talk in front of people and I knew I needed confidence so I took Matua's (William Davis’) class to do that. Slowly but surely it's getting there."

Wilson and Courtney are now doing the Kawai Raupapa Certificate in Performing Arts level 3 led by Aaron Henare which, as luck would have it, runs in tandem with their own level 4 class.

"It's been great. We really respect Azza and Matua. They really welcomed us - it's like a big whānau."

Robynne has worked with youth ever since graduating with her very first TWoA qualification in 2004 -  a National Certificate in Social Services. At the time she was working as an airport cleaner at night and then coming to class during the day.

"Being a solo parent, I knew I really wanted to help young people and I didn't want to be on the DPB all my life."

Today, her eldest son is a computing kaiako, her sister is a computing tauira, her children's dad did Te Ara Reo Māori and another niece is currently studying for a Bachelor of Education. When it comes to tauira who are whānau, Te Wānanga o Aotearoa could be mistaken for Te Wānanga o Anaru.

Robynne is also eyeing up a raranga course. She plans to one day teach her 16 mokopuna weaving, while she instills in them the confidence to believe in themselves.

"I'm just loving our course, I've got so much respect for our kaiako and my kids. I have to say, as their mum, they have blossomed. It's really opened a lot of doors for us."