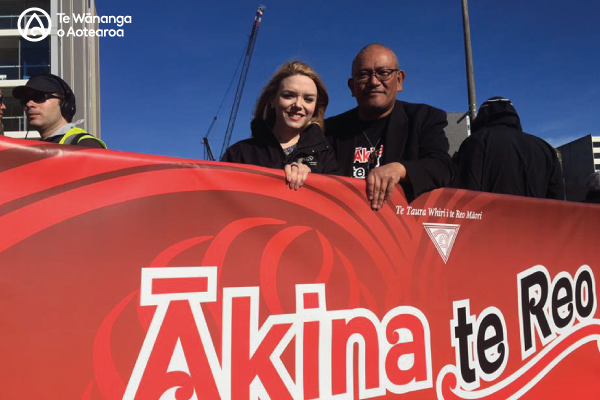 Visiting Irish PhD scholar Aoife Finn is a great role model for te Reo Māori and shows what can be achieved when you try, the head of Te Taura Whiri i te Reo Māori (Māori Language Commission) says.

Ngahiwi Apanui met Aoife on Monday during the inaugural Te Wiki o te Reo Māori parade in Wellington and says the extensive media coverage she has received has promoted the benefits of learning te reo to a much wider audience than usual.

“She has got a lot of coverage since she has been here and we are looking for people who can take the language to other places,” he says.

“We’re expected to speak Māori or have some knowledge, but an Irish woman or somebody like that has cut through with a wider audience.”

He says Aoife is a great example to others.

“We invited her here today as a way of saying to non-Māori New Zealanders, ‘Look. Here’s a wahine from Ireland who has used her own initiative to learn te reo Māori. If she can do it, so can you’.”

Aoife says taking part in the parade was one of many wonderful experiences she has had since her arrival last week.

“It was fantastic to be among people with such a passion for the language,” she says.

Aoife is into her second – and last – week in Aotearoa after being invited by Te Wānanga o Aotearoa.

During her time in the country, she has been inundated with media requests and has appeared on radio, television and print throughout the motu.

She has toured much of the North Island with Te Iwa o Matariki, the TWoA touring Matariki exhibition, and also taken part in reo lessons, along with her starring role in Monday’s Te Wiki o Te Reo Māori parade.

Aoife heads home this weekend and says her time in Aotearoa has been a great learning experience.

“I have never experienced hospitality like I have from Te Wānanga o Aotearoa. I feel like I’m part of the gang,” she says.

“To be immersed in a Māori speaking environment has been fantastic. I have learned so much about the culture too. You can read about it in books, but to have this experience, it’s been great. A lot of people say my pronunciation is a lot better now and every day I think I can pick up more and more of what people are saying.”

She says the revitalisation of te reo Māori has some parallels with her native Irish language.

“It’s been really neat from the perspective of the Irish language to see what people are doing here. I have a notebook full of information I look forward to writing it up formally and I really do feel energised by the experience.”

And she has a message for her friends and family when she gets home.