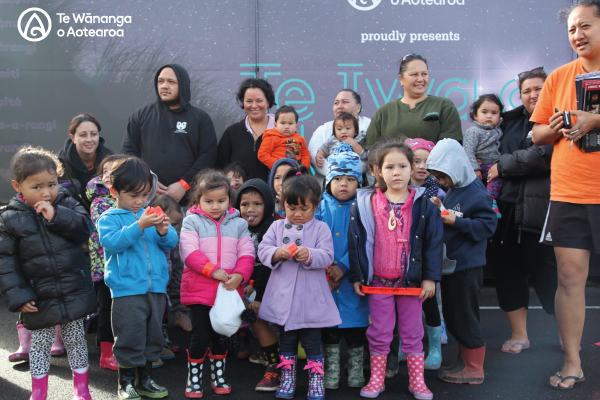 Kids from a Whangarei kohanga reo were the first in the country to experience Te Iwa o Matariki and it wasn’t just ngā tamariki who learned something from the impressive roadshow.

The Reo Ora initiative, which challenges commonly held misconceptions about Matariki, features a 15-minute video screened in a purpose-built truck fitted with a panoramic screen and surround sound.
It aims to re-educate New Zealanders about Matariki and debuted in Whangarei last week.

Among the first through the doors were ngā tamariki no Te Kōhanga Reo o Raumanga Kōhungahunga.

“It was a real eye opener, to see and learn more about the actual stars and who they are. To me, Matariki was always about the new year and celebrating culture. To hear there are specific times when you can see the stars, well, it's just good to know these days as there's been no one there to show us.”

She says the kohanga was already busy with Matariki kaupapa and they were excited to add Te Iwa o Matariki to their maramataka.

“We held a whānau day for tamariki to celebrate their tupuna which was really neat,” she says.

“They put on a kapa haka show and made taonga whetū, ngā pikitia and key rings to gift to their koro and kuia.”

Rangatahi from Huanui College and Te Kura Kaupapa o Rawhitiroa also visited Te Iwa o Matariki and learned there were two more whētu the ancestors acknowledged - Pōhutukawa – which has a connection to the afterlife - and Hiwaiterangi, which attends to our future aspirations and dreams.

Te Wānanga o Aotearoa Poutiaki Reo Paraone Gloyne told the rangatahi not to let media dictate to them what and when Matariki - or Ngā mata ō te Āriki ō Tāwhirimatea - was.

“They're not seven sisters, those are things we've taken from other cultures. Scientifically there are millions of stars in the constellation. We've introduced two new old-stars into the family and each has great significance for te ao Māori,” he says.

Te Iwa o Matariki is touring the North Island and has so far visited Whangarei, Rotorua and Gisborne and is in Porirua today. The haerenga finishes at the Te Wānanga o Aotearoa Super 12 Kapa Haka event, taking place at The Cloud in Downtown Auckland on Saturday, July 9.