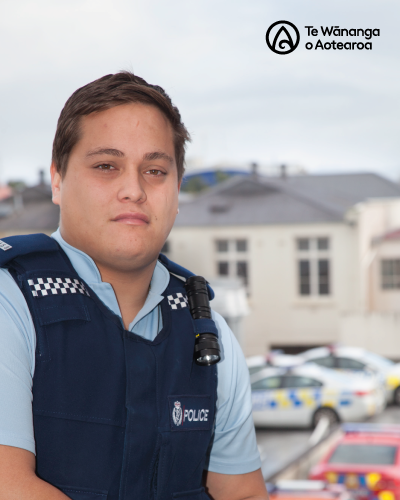 While some people celebrate their 21st with a yard glass, Eruera Rāwiri marked the milestone by receiving the key to a career in the Police.

In February, the Tairāwhiti constable graduated from the Royal New Zealand Police College on his 21st birthday and got straight into the mahi on his first posting, to his hometown of Gisborne.

However, it took three years to get there after the former Gisborne Boys High School student first heard about a police preparation programme Te Wānanga o Aotearoa kaiako Hogi Hogarth was delivering at the Whirikoka Campus.

Eru, who is of Te Arawa descent, thought it would be a good career choice but knew it would take time.

“I knew I wouldn't get in straight away but it was something that I could work toward. From there, I put in an application to join the course and I was accepted,” he says.

“That was great, I met a lot of people around my age and we built some solid friendships because everyone was working towards the same goal. I don't think I would've been able to get through without them.”

Eru passed both the theory and fitness testing by the time he was 18 and also went through the police vetting process, went on patrol with police officers to get an idea of what was involved and got his full driver’s licence, which is a prerequisite for the job. But he still faced a wait.

“When I recruited there weren't any vacancies in Gisborne. When that happens you have to sit in a candidate pool for the district you've chosen,” Eru says.

He continued working in a local supermarket, maintained his fitness and met more local police through playing soccer but it was still two and a half years before a vacancy came up in October last year and he spent the next four months at Police College with 40 other fresh recruits.

It was a pretty daunting experience, he says.

“Basically it was 16 weeks of study then once the course is finished you've still got to go through another physical competency test to show that you're fit for duty.”

Eru passed those tests and was the youngest of five constables to graduate from his Te Wānanga o Aotearoa cohort. Overall, he says it was worth the wait and the hard work involved to proudly take his place in the police force.

“It's been great. I couldn't think of a better 21st birthday present.”