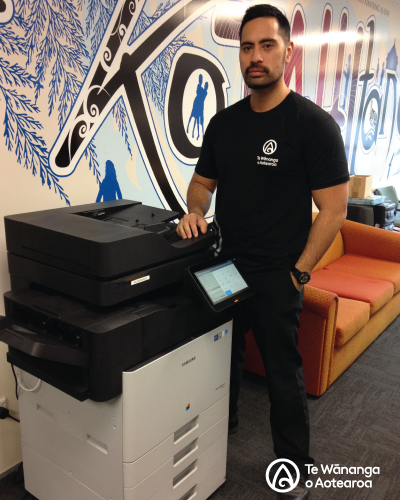 Hangarau Network Engineer Phil Te Tai, will be part of the team assisting with installation

Te Wānanga o Aotearoa kaimahi and tauira will be the first in the world to engage with Samsung printers that are fully capable in te reo Māori.

The printers, which will be integrated at TWoA sites across New Zealand from October and fully implemented by the end of 2016, feature a built-in android-based touchscreen tablet.
The tablet gives tauira and kaimahi the option to interact with the printers entirely in Māori.

The Samsung printer functions fit perfectly with the values of TWoA and reflect the organisation’s desire to put the user and not the technology first, said Tumukahuroa Hone Paul.

“Our Māori language strategy focuses on normalising te reo Māori and using it as a part of our everyday life, both in our workplace, and in our learning environment.”

“Having Samsung printers that are operated in te reo Māori encourages our staff and students to use te reo Māori on a daily basis,” said Hone.

Verdon Kelliher, who is strategic innovation director at Samsung Electronics, said Samsung noticed there was a lack of technology in the market supporting te reo Māori, particularly for commercial products such as printers, which are commonplace in education and Government institutions.

“With our A3 printer range, we saw an opportunity to develop a language solution that could cater for this unique New Zealand need,” he said.

The project was the result of an intensive software translation project, led by Samsung’s developer team in Korea, and supported by Samsung’s local New Zealand enterprise team, and Māori translators Netana Enterprises.

The task involved translating hundreds of words and phrases from English into Māori, which were then carefully tested and cross-checked to ensure every command and notification on the printer was comprehendible.

More than 26,000 lines of text were translated.

“Simple English phrases that are commonly used in technology, such as ‘quick start fax’, don’t have a natural equivalent in Māori. Part of the challenge was to match technological terms with their best Māori equivalent,” said Netana Enterprises Director, Kereama Nathan.