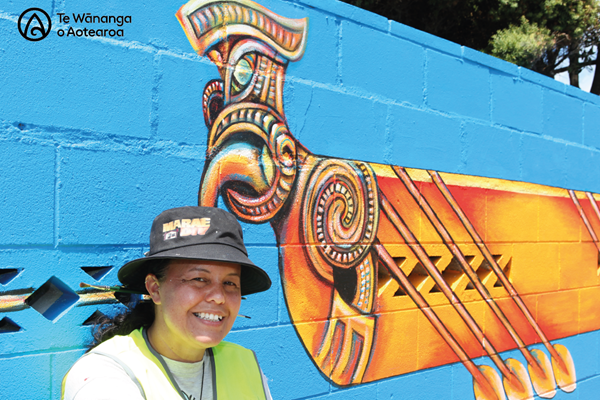 When Te Wānanga o Aotearoa kaiako Regan Balzer was younger, she was part of a rangatahi group involved in activities at Te Kopua Marae in Whaingaroa, attending events like the Te Ao Mārama festival and the Proud To Be Māori hui.

So when the call went out for helpers to take part in a major refurbishment of the marae, she was quick to sign up.

The four-day transformation was part of the popular Marae DIY television programme, which now has Te Wānanga o Aotearoa as its major sponsor.

The new series screens on Māori TV and TV3 this year and the first episode, which screened on Saturday, features Te Kopua Marae.

Te Kopua is not a marae in the traditional sense but occupies the land that was returned to Tainui Awhiro through protest action led by the late Tuaiwa (Eva) Rickard.

Regan says the opportunity to help out with the makeover was a chance not to be missed.

“I had fond memories of Te Kopua Marae, so when the call went out I was keen to help them, because of the place and the significance and what Eva did. It was awesome. It was a crazy four days but I like big projects like that,” she says.

The highly-regarded artist was - not surprisingly - put on painting duty.

“I was in charge of the mural on the fence and the entranceway to the property. The artwork is based on the land, the occupation and the work Eva did,” she says.

“We used really bright colours because there’s a kohanga next door.”

She says it was good to have so many others helping out where they could on the project, with people coming and going as time allowed.

“The painting was for the community and it made the area more visual. There are so many different ways art can be used, it doesn’t need to just hang in galleries, it can uplift a community.”

The focus on the show was on repairing a stage built in the early 1990s for the Te Ao Mārama Festival, which celebrated the return of 88 acres to the mana whenua whose papakainga was razed and kumara garden destroyed during World War II to make way for an aerodrome.

When the war ended the land was not returned to its owners as promised but was instead leased to the Raglan Golf Club, which created a new course on the site.

Tuaiwa Rickard and whānau campaigned to get their whenua back, occupying the golf course in 1976 and 1978 before the government eventually returned the land in 1983.

Te Kopua became a farm with a marae and training centre site.

Along with being an accomplished artist, Regan is also a registered teacher and says while her teaching has a distinct kaupapa Māori focus, it is encompassing of both Māori and non-Māori students wanting to study art.

“We have different ethnicities on the programme too.  They develop a deeper awareness of what Māori is and their relationship to that. Anyone who wants to further themselves as an artist will enjoy our course.”