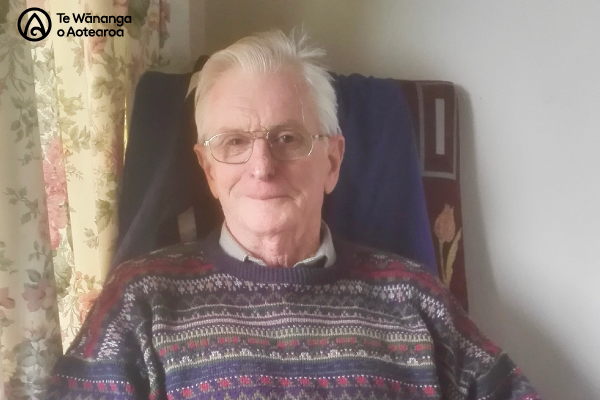 When David Meek read a Letter to the Editor in his Tauranga newspaper stating there were no Māori land wars, he admits he "got a bit hostile," in his written response.

"It was from someone who lives in Matapihi of all places," he says.

"They just have to look over the harbour to see Gate Pa."

"It astounds me that people still think confiscation happened because Māori were very naughty, and now that they've got their land back they should just shut up. It does get my blood up a bit."

By default, David's own education and experience might have put him in the same camp, but studying with Te Wānanga o Aotearoa helped "opened my eyes."

David first enrolled to learn te reo in 2002 and in 2005 tackled the Mauri Ora programme through Home Based Learning.

David was born in Dunedin and moved to Palmerston North when he was 12. He recalls being excited about the move because his Dunedin teacher told him that he might actually see a Māori.

"I've always been interested in our history but quite honestly, at that age, I didn't know what a Māori looked like."

His first real interaction with tāngata whenua came when he moved to Auckland in 1965 to work as a hospital orderly. There he met "a Māori chap from Kaikohe named Robert".

The two became long-term flat mates and moved to Tauranga Moana in 1980.

He says learning te reo was a challenge.

"It was interesting but tough-going getting my tongue around the words and getting the phrases right," he says.

Last year - again through Home Based Learning - he completed the Certificate in Tīkanga Māori and says there is a growing interest around occasions such as Matariki, in the rest home he now lives in.

"Management saw the course materials arrive and they're supportive, asking me to help with activities."

He has helped organise activities such as kapa haka performances by Tauranga Girls' College and talks on star constellations with navigator Jack Thatcher.

He says his late education is something he is keen to continue.

"I thought I wasn't clever enough for that sort of thing but I've learned more now than what they were teaching me at school," he says.