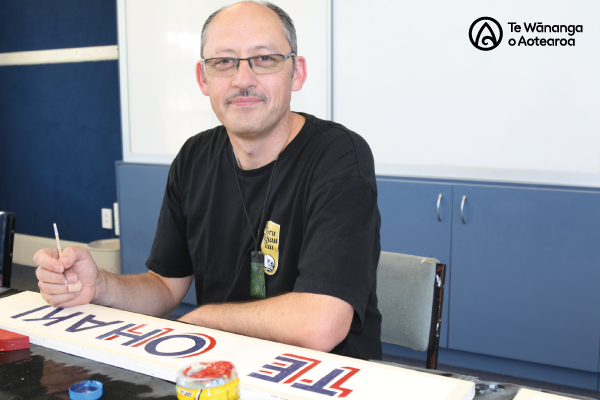 For Te Wānanga o Aotearoa Maunga Kura Toi kaiako Chris Bryant-Toi, helping out on Marae DIY was an opportunity to use his artistic skills for an important project while reconnecting with another side of his whānau.

Chris, who teaches in Hastings, took part in the episode which screened two weeks ago and which featured Ohinewaiapu Marae, at the East Coast settlement of Rangitukia.

The programme is now sponsored by TWoA and screens on TV3 on Saturday mornings and will screen on Māori TV later in the year.

“Ohinewaiapu is my grandfather’s marae but it didn’t really feature when I was growing up, we were more going back to our grandmother’s marae in Tikitiki and Te Araroa,” he says.

“So it was quite nice after all these years to go there,”

Chris is from the ‘kiore’ line of Goldsmiths and Colliers from Ohinewaiapu and says the people appreciated the return of whānau to support the Marae DIY project.

“They were quite pleased that someone from the Peia Collier line was there,” he says.

During the four-day marae makeover project, Chris worked mainly at the local school Te Whare Tapere Nui o Whatonga where he designed and painted a maihi whare frieze to be installed in the wharekai, Te Ōhākī.

“It was nice to have the tamariki there seeing what we were up to,” he says.

The design of the maihi whare portrays the development of the marae and includes the significance of the kiore - Polynesian rat - to the rohe.

“From the stories of our kaumatua and kuia the kiore was a residential tiaki kai, tiaki taonga or a treasured nurturer. I’ve used the metaphor of the kiore’s pathway to reference our ability as descendants to find our way home after venturing out into today’s world. The marae karaka tree berries represent the kiore’s quest to do well at home and abroad.”

The frieze also includes the story of how the wharekai came to be built.

“There is a stream below the foothills by the marae in its current location and a key group of nannies, like Makere Ngongohau, were sitting beside the stream doing their weaving under a tree. They said to themselves wouldn’t it be nice to have a wharekai and so they organised the men to build it.”

“Walter included three generic images of nannies to represent them all and their ōhākī or wishes for us.”

Chris says the project involved little sleep and he even ended up staying an extra day to ensure the mahi was completed to the highest standard.

“We were pushed for time and there were some late nights and it depended on the skill level of the people who were helping but whatever was required we tried to do to the best of our ability for our marae.”

Chris says he’d be happy to be involved in another Marae DIY project, particularly if he was able to take his tauira with him to help.

“Unfortunately this one was at the very start of the academic year and the tauira were just settling in.”

Several months down the track, Chris is now considering how to keep connections with Ohinewaiapu Marae warm.
Back to news & events