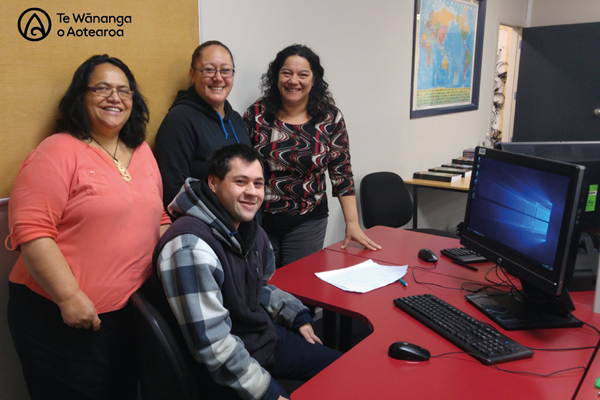 
A young Whakatāne man living with a physical disability has a brighter future after impressing his tutors with his rapidly developing computer skills.

Ayden Starr, 22, has completed the Level 2 Computing programme at Te Wānanga o Aotearoa campus in Whakatāne, is now studying Level 3 Computing and considering what to study next.

Wiremu Kora, advisor tauira support at the Whakatāne campus, says he always thought Ayden would benefit from learning with TWoA.

“I really wanted that boy. This is the right place for him,” he says.

“He’s a top boy, the Powerpoints he does are amazing. He’s got his head screwed on, and we’ve been there for him.”

Wiremu says when Ayden first enrolled, “he was that shy he wouldn’t look at you”.

Now, with the ongoing support of Wiremu and tutors Daniel Herbert and Elsie Rakuraku, his confidence has grown, and his skills have developed.

Ayden has been working with Jeanette Tioke, the Local Area Coordinator for ImagineBetter, a community-based organisation that aims to help people with disabilities live full and meaningful lives within their communities.

She says TWoA appealed for Ayden as it supplied the wraparound support he needed.

“He’s definitely getting that.  They just do little things like check in with him to make sure he’s okay, giving him that extra support and acknowledgement. And they organised transport to make sure he got there.”

It’s a far cry from when Ayden first enrolled.

“The first day I took him there I was only meant to stay for karakia, but he wanted to leave. He looked so scared and almost ran out of the room. It was all too much for him. He’s shy because of his disability,” she says.

“But he’s doing well, and we’re trying to find the right course for him to do next. It’s slowly building his confidence. He’s made a start now, and that’s awesome. He’s done Level 2 Computing and then he self-enrolled in Level 3. That’s a big deal for him.”

Wiremu says having Ayden at the campus has also taught kaimahi a few things.

“He teaches us that thing called patience,” he says.

“The first two weeks, I’d have lunch with him and just talk to him, and now his future is looking good. That’s the awesome thing, whanau transformation through education. This is it.”