Body builders get taste for success 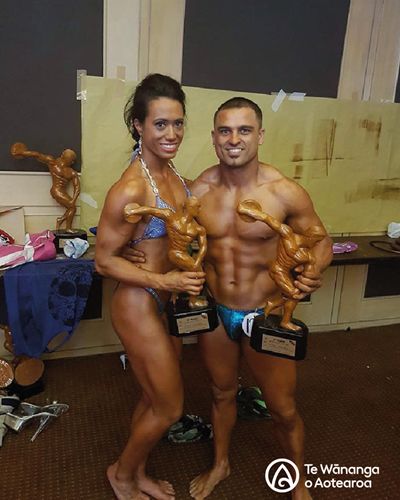 Looking at buffed Gisborne couple Stacey and Mikaere McBeth it’s hard to believe they used to think nothing of polishing off a bucket of KFC after a day at work.

That was a little over a year ago, but now the couple, both te reo Māori teachers with Te Wānanga o Aotearoa, have ditched their unhealthy habits.

They’ve also picked up a passion for bodybuilding – and a number of national and international titles.

Stacey and Mikaere recently returned from the Phillipines where they won the 2016 Asia Pacific Mixed Pairs category, beating off teams from several other countries.

Their win is among several that Stacey has either won individually – she returned from the Nabba Nationals over the long weekend placing first in the Open Figure Short - or with Mikaere in tow and the latest since the pair started their Tau Ora journey last year.

“Our lifestyle was surfing but also about convenience. If you were hungry you could go down to the Chinese takeout and order pork and rice or KFC after work and over the weekend you’d just blob out and eat McDonalds.”

“We don’t do these things anymore,” said Stacey.

At the time, Stacey registered 32 per cent body fat – the average for a female is supposed to be between 18 and 21 per cent.

“The competition was about most body fat percentage lost and I took the challenge on. I must have taken it to the extreme because it was the fastest way to lose fat.”

“I changed my eating habits and started body building. This year I took Mikaere along to the gym and we haven’t looked back.”

Mikaere had 27 per cent body fat. His healthy range was anywhere between 15 and 19 per cent.

He finished second overall in the weight loss competition to his wife.

Mikaere, who was 86kg when he started bodybuilding, now walks around at about 72kg and during competition can get to as low as 63kg.

Their new lifestyle has meant a lot of sacrifices of foods they used to gorge on. They also spend a good chunk of their weekend preparing meals for the week ahead.

“These days it’s about not having Christmas breakfast or new year’s breakfast, probably ever again,” laughed Mikaere.

They say their lifestyle, which initially bemused their fellow kaimahi, has inspired them to consider what foods they’re eating and to exercise more.

“I think we have influenced cleaner eating among some of our kaimahi and some are even looking at competing in body building next year, which is cool,” said Mikaere.

For now, their sights are set on the Mr and Mrs Universe competition to be held in Germany in November where they will compete against others from 51 countries.