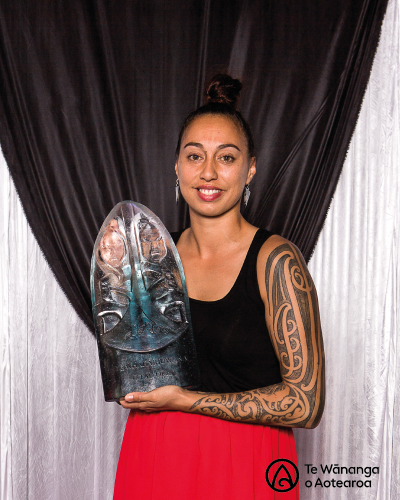 Chantelle Nikora wasn’t aware there was an overall Tau Ora champion award until she heard her name read out.

Chantelle, Advisor Tauira Support Youth at the Raroera Campus in Kirikiriroa, won the title - Te Whakaihuwaka o Tau Ora 2016 - at the annual awards night, hosted in Māngere on 10 November.
It capped off what was already a successful night for Chantelle, who had earlier picked up two other accolades.

She won the Te Manawanui Award – for the person who earns the most points for the Tau Ora pedometer hīkoi – and, as part of Team Tewereke, won the Te Punga Oranga award, which goes to the team which takes “an holistic approach to their wellbeing and whose influence reaches well beyond TWoA and into their community”.

After those two awards, she thought her night was done.

“I never even knew there was an overall prize,” she says.

“I knew about the steps one because you can track it, but it was a big surprise, especially since I didn’t know it was a thing anyway.”

Chantelle says she had always been into physical fitness but had put in extra effort this year to get in shape for kapa haka.

“The main reason I got into it this year was because we need to get in shape for Te Matatini.”

She is hoping to make the cut for Te Piki Kōtuku o Ngāti Rongomai and says the team’s routine is physically taxing.

“We do like 40 knee drops during our performance and I was getting really tired so I thought it would be good to get in shape.”

She says it helps that she works with Youth Guarantee sport and fitness tauira, along with STAR tauira, who help her keep in shape.

But she is also known for encouraging others to achieve their fitness goals and that’s a role she thrives on.

“I enjoy pushing others. They have to find the spark and I push them to that, then they’re on their way. I tell them ‘when I stop nagging you, I stop caring’.”

She says her success is as much about her team as her own dedication.

“I have to give a massive shout-out to my team and all the kaimahi at Raroera,” she says.

And she’s clear about her aims for the next 12 months.

“I want to be the first person to win the steps award back to back.”

The Te Punga Oranga Award is based on our holistic wellbeing model and is about acknowledging a team who have proactively taken an holistic approach to their wellbeing and whose influence reaches well beyond TWoA and into their community.

Awarded to the person who has earned the most points with a combination of both exercise and challenges for the Tau Ora pedometer hīkoi.

These awards acknowledge individuals who have been nominated by their peers for their efforts, dedication and participation in not only Tau Ora but their holistic wellbeing.  These individuals have affected, influenced and motivated change in not only themselves but other kaimahi, their whānau and sometimes their communities.