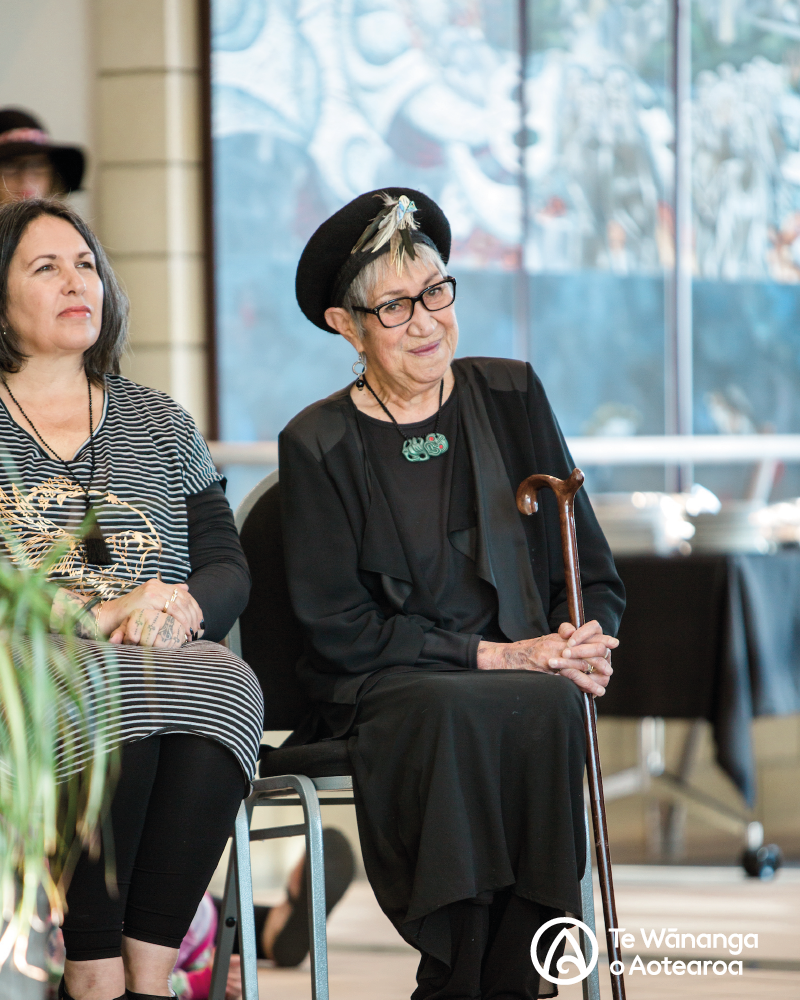 Back in the day when there were no marketing resources, recruitment staff or pool cars, Marie Panapa would take a creative approach to spread the word about a fledgling Te Wānanga o Aotearoa.

Aunty Ma, as she’s known affectionately throughout TWoA, headed a recruitment and marketing team of one – herself – for the entire Waikato area when the organisation, then known as the Waipā Kōkiri Arts Centre, was trying to establish itself in the mid-1980s.

She also doubled as a curriculum and resource developer, finance controller, furniture builder and kaiako.

“These were times when we had no cars, no money and you were always trying to work out what’s the best way to draw people’s attention to what you were doing,” she says.

“I tried to maximise things I was good at so I would put a banding wheel on the footpath and like any artist I would have a platter that hadn’t been designed, one that was in the process and one that had been through the kiln and finished.”

“People could see the process, the platter would come through like this and it would become something beautiful like this and they would stand for ages and wonder where all of this took place and It was through that engagement that I was able to maximise the kōrero for our sites.”

Taking something in its roughest form and helping to re-shape it into something beautiful, is something Aunty Ma has been a part of since the inception of TWoA.

Aunty Ma and her husband Rewi Panapa, Rongo Wetere and Iwi Kohuru Mangu wre responsible for the creation of O-Tāwhao marae for Te Awamutu College students to aspire to in a beautifully carved cultural environment.

The success of the marae project evolved further with the creation of the Waipā Kōkiri Arts Centre, which in time became Te Wānanga o Aotearoa as the founders responded to the demand and need for a more diverse range of programmes and course delivery methods.

Te Wānanga o Aotearoa is now New Zealand’s second-largest tertiary organisation through which tens of thousands of students have completed some form of higher education.

Aunty Ma says it’s a time of quiet reflection as she recalls the “countless times the rain beat through the roof and dripped to the floor to the open embrace of buckets strategically placed throughout the building”.

“Through the continuum of challenges that at times seemed unrelenting Te Wānanga o Aotearoa has overcome adversity through the diligence and committment of dedicated and highly qualified staff and caring leadership.  The benefits for wānanga have become the benefits of opportunity for all communities of Aotearoa, New Zealand.”

There are now more than 100 TWoA sites around the country offering programmes from certificate to Postgraduate level.
In relative terms, the growth of Te Wānanga o Aotearoa has been phenomenal but Aunty Ma says she’s not surprised.

"We have always had a strategic plan from the start of this initiative that clearly set out our purpose, our mission our vision, where we were heading and how we were going to get there.  We began this journey because the education systems in this country did not support the needs of those who were struggling and we knew we could turn this all around and make a difference.  I believe we still apply our own magical learning experiences for all New Zealanders and raise the academic bar of achievement and success because 300,000 tauira can't be wrong."

Aunty Ma said the founding Group and staff over the years faced numerous challenges not only from the Crown but from their communities.

“I dare say my view was entrenched in the belief that here was a body of amazing creative visionaries who were going to make an impact on the educational horizon in New Zealand and that's what happened, people had to find their own comfort space with that.”

"The Crown’s delay in providing Capital Funding drew the line in the sand for us. Every tertiary institution in this country had been supported with hefty injections of capital but to deprive us of the equity to educate our own people placed us under massive duress and extreme risk."

Aunty Ma will still have some involvement with TWoA, including a role with its recently established Kaumātua committee and she will be in an advisory capacity with the newly-formed Cultural Summit.

She says with a laugh that she’ll likely do “a lot of online shopping” now that her time has been spared but the organisation she helped to create will always hold a special place in her heart.

“The thing is we could very easily end up having to use buckets again if we are not careful. So we need to be aware of our lessons from the past so they are not repeated in the future.”

“Now more than ever, now that we have established ourselves in the tertiary sector, we are in a wonderful position to begin creating real change.”