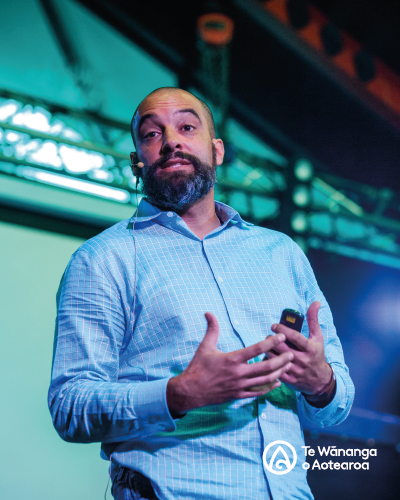 More than 100 registrations shows the value of last week’s Disruptive By Nature workshop held at Zeal in Hamilton.

Executive Sponsor and Tumuratonga Keri Milne-Ihimaera says we see ‘being disruptive’ as a positive thing and it’s inherent in our DNA.

“However, when was the last time we ‘disrupted’ the traditional thinking in our own minds – to think about what we are offering the young people we serve within Te Wānanga o Aotearoa and the wider community?”

“Disruptive By Nature was about us as kaimahi being in the confident position to challenge ourselves to critique our practice” she says.

“We have YG kaiako, youth workers, community workers here to find ways to serve the needs of the community. The vision is to keep questioning whether we are doing all we can do,” she says.
“We want to challenge our current thinking and inspire ourselves to consider new possibilities.”

The day featured presentations from various groups and individuals, including Youth Guarantee Kaiwhakahaere Ako Wayne Poutoa, who has led many powerful community development initiatives and is a recipient of the Vodafone World of Difference Award and Kiwibank Local Heroes Award.  He talked about his experiences and background, that have shaped the person he is today.

Haka infusion comedy group JGeeks told the story of their development and the challenges they faced along the way.

JGeeks founder Jermaine Leef says the group is “just a bunch of young Māori growing up in today’s world”.

“People thought we were plastic Māori so we formed a thick skin early on,” he says.

“But that doesn’t mean we have to be traditional Māori. We’re also influenced by pop culture so we try and bring those worlds together. It’s a challenge being insecure about my own ideas and the toughest thing is putting it out there to be smashed. But we’re just being Māori and jamming it today styles.”

Keynote speaker Dr Jeff Duncan-Andrade, from San Francisco State University, used the words of rapper, actor and poet Tupac Shakur to highlight his view that how people think about a problem, frames the answer.

“His poem Roses That Grow in Concrete is about young people growing up in poverty.

The poem, which talks about a rose growing through concrete, encourages people not to look at the damaged petals, rather “look at its will to reach the sun”.

He says it was important to understand Tupac’s message and says many young people growing up in poverty suffer from complex post-traumatic stress disorder due to the ongoing trauma they face with little relief.

“Unlike soldiers with PTSD, the kids don’t get to leave the toxic stress behind,” he says.

“Kids carry this toxic load but they are very good at masking it.”

He says hope is the key and “that begins with understanding your own value”.

“Remember, the kid that needs you the most is going to be the kid that’s the hardest work.”

There were opportunities throughout the day for kaimahi to workshop and discuss how Te Wānanga o Aotearoa and the wider community is actually doing ion terms of serving the needs of young people.

Participants were challenged to consider: “What else could we do?”.

Jade says feedback from the event was extremely positive and she hopes to turn Disruptive By Nature into an annual event.