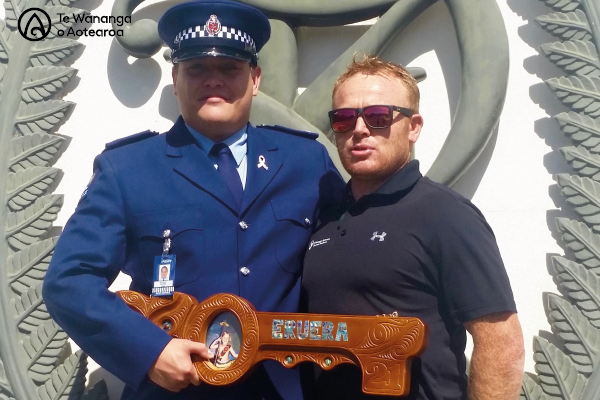 The Level 4 certificate will take Hogi away from the strength and conditioning Police preparation work he's been focused on for the last seven years, aligning him more purposefully to his holistic mindset.

"It's not just about muscles and heart rates, we're also talking about healthy environments and kai," the father of five says.
"Nutrition will be a big component."

The great outdoors of Turanganui-a-Kiwa will be his training gym and he'll have an emphasis on working hard "just like our tipuna did".

"We'll be looking at ancestral lifting, or the technical way we can practically move big stuff like logs on the beach or heavy machinery," he says.

"It's about movements and breaking down the movements that are relevant to the sport and life in general, whether that be surfing or waka ama, it's imperative."

While climbing Kaiti Hill is a walk in the park compared to competing in the Great Wall of China marathon – which he tackled in 2015 – he says it all comes down to knowledge of basic physiology and mental focus.

His results speak for themselves. Hogi was certified as a physical trainer in Australia after working at the Sydney Olympics in 2000. It was there he met his Ngāti Porou wife Suzanne and the pair returned to Gisborne to start their family 14 years ago.
In 2013 he started running boot camps which proved so popular one of his clients dropped 60kg before setting up his own boot camps.

"I like to see people educated and trained in the fitness industry accurately."