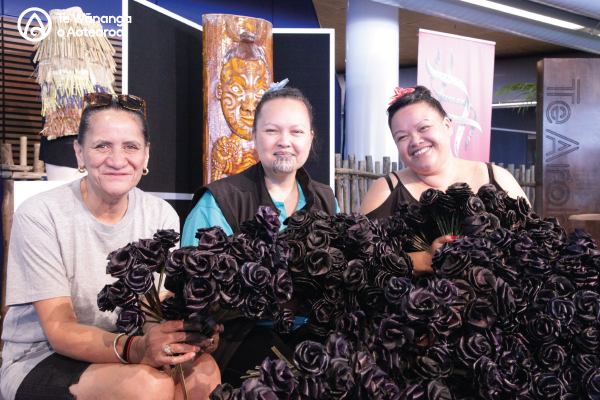 The harakeke bouquets, made by Hazel Grace, Nadya Rapata and Dana Rapata, were gifted as koha to visitors who attended the Tāmaki Herenga Waka Festival that took place over the Auckland Anniversary weekend.

The festivities featured equal parts of indoor and outdoor activity focused on acknowledging and celebrating the history and heritage of Tāmaki alongside contemporary Māori culture.

The roopu of practitioners, which also included Muna Lee, Kaututu Mataora and carvers Cory Boyd and Bobby Te Huia, spent  three days interacting with the general public as they demonstrated their artistic skills, while surrounded by a full schedule of A-list musical entertainment.

Dana says the flow of the team's area worked nicely with many visitor accents and languages asking questions as they got the opportunity to enjoy their taonga.

"There were so many different cultures coming through which I found fascinating. It goes along with my Master’s Thesis about using traditional arts in such an urban environment. It really put Māori and our art on the map."

"The atmosphere with so many different cultures was so positive and friendly. Seeing people walking around with their black rose, I loved it."

Hazel says she always enjoyed catching up with neighouring sites including the rongoa and tā moko workshops located nearby as well as working with her contemporaries including her whakairo brothers.

"The familiar faces, and the continuation of building relationships made it a pleasure, " she says.

"Here we all are maintaining mana Māori under one roof."

Hazel and Dana both began a tukutuku panel piece using pingao and kiekie to demonstrate the binding stitch used to build houses.

"It was chosen to symbolise bonding with our neighbours, and binding everyone, the people and their cultures together," says Dana.

"It was also amazing to have my daughters here teaching children our art as well."

Whakairo kaiako were equally engaged with interested public and even managed to complete a pou piece.

"This time I got to be more hands on," reflects Cory.

"The mussels were pretty good too," says Bobby.

The outdoor events included a tu taua demonstration by Malcolm Kerehoma and a series of have-a-go waka experiences. These activities helped to generate more interest in the Hauora programmes available in 2017.

This is the second time the free, family-friendly, three-day event has been held, and the first time to be hosted at the ANZ Viaduct Events Centre.