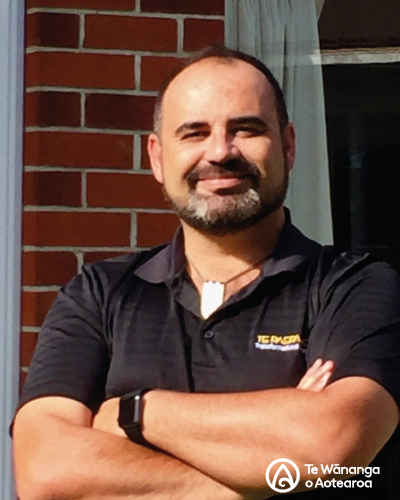 What started out as a good way to get to a music festival without buying tickets has turned into one of the most enjoyable annual experiences for Dennis Ngawhare.

Dennis, Kaiwhakaharere Ako at the Rangiatea Campus of Te Wānanga o Aotearoa in New Plymouth, is one of hundreds of people who volunteer at Womad (World of Music, Arts and Dance), which is on this weekend in New Plymouth.

“I’m basically a kaiawhina to make sure they get to the venue on time and get to the stage an hour before the show,” he says.

“With many of these artists, most of their involvement with New Zealanders is through their artists’ minders so we are the face of Womad in many ways. After they’ve got to where they need to be, I get a few hours off to see the music.”

That’s what make it such a fun festival to attend, he says.

“You get to hear a lot of music you wouldn’t usually hear and that’s great.”

In previous years he’s taken international bands up Taranaki Maunga or sourced rongoa for others with sore throats. There’re also the inevitable questions about te ao Māori when the international musicians performing at WOMAD are welcomed to the region with a pōwhiri.

“There’re a lot of indigenous people coming through and they’re always interested in things Māori,” he says. That’s something he particularly enjoys and the entire festival has many Māori volunteers in prominent volunteer roles.

“They see us in roles which aren’t just picking up rubbish or cleaning toilets.”

Dennis says other kaimahi at Rangiatea also volunteer at Womad and help with Te Paepae, a stand at the festival which highlights Māori arts such as raranga, whakairo, tā moko and kapa haka.
And while kapa haka fans were happy to spend days watching performances at Te Matatini, Dennis says Womad is more his style.

“Womad is my Matatini,” he says.