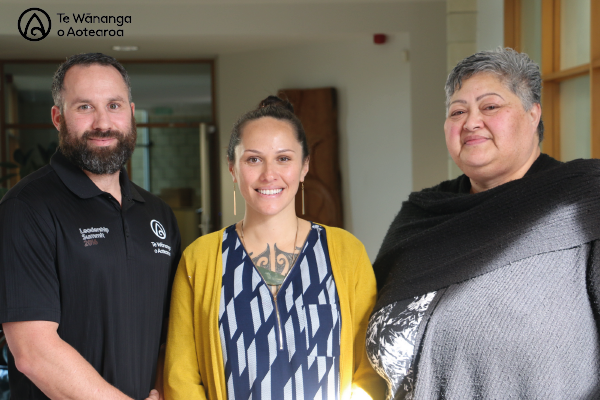 Doctoral students Hohepa Maclean and Koko Hotere have been announced as the first recipients of internships to work on the flagship He Rongoā tō te reo Māori – Te Reo Māori as a form of healing rangahau project at Te Wānanga o Aotearoa.

The pair met the Tira Rangahau team on Monday and will be in their roles until November.

Lead kairangahau Dr Dee Sciascia says both candidates were selected for the doctoral internships based on the high calibre of their applications and the connections and overlap of their own doctoral work with our flagship rangahau project.

“The project team is excited to have the two kairangahau join our team and welcome their experience, skills, ideas and contributions,” she says.

“The nature of the relationship between kairangahau and the project is one of reciprocation and collectivity.”

The kairangahau will have opportunities to be involved in the dissemination of preliminary findings through attending conferences and presenting to various communities and will also be able to connect to national and international indigenous networks which are being developed as well as having access to mentors within the rangahau Māori space.

This will benefit the project along with their own work.

The project seeks to understand the barriers and motivators for learners of te reo Māori and aims to produce new teaching approaches.

It is the first time rangahau internships have been offered and the initiative contributes to the ongoing building of rangahau capability, a key strategic objective of Te Rautaki Rangahau.