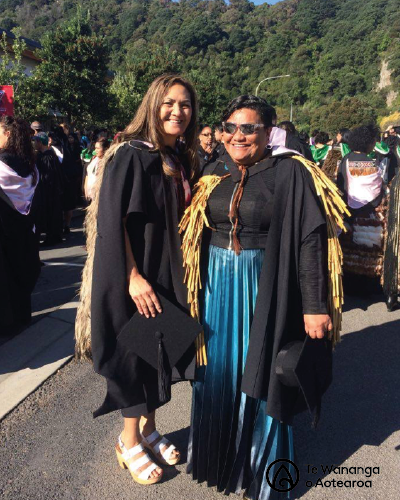 To help tauira make a positive difference in the lives of others, four Social Services kaiako have attained their own academic success.

Leone and Meri (pictured above) both graduated in May from Te Whare Wānanga o Awanuiārangi with a Master of Indigenous Studies.

"Laws were not set to build houses but a reclaiming, repositioning and a revitalisation of tikanga gave correctness, reason and commitment to the kaupapa," she says.

Leone based her research methodology on the making of a korowai, weaving together interviews, pūrakau and life experiences.

"This is kaupapa Māori that now begins to transform into a self-developed analytical tool. The realisation was, no one else can do it for us. As a whānau, unitedly we can do anything."

Meri had two motivations to complete her thesis on wairua and matakitetanga; the first being her mokopuna.

"Second, is to place a legacy of Te Ao Māori into a public, academic domain to normalise a phenomena hidden for too long, yet known to all indigenous cultures."

Sonia graduates with a Master of Human Rights from AUT this month with her thesis titled; On Our Doorstep – A Voice for Homeless Youth which became a kaupapa dedicated to the rangatahi in her life.

"The homeless population is a fast growing community and like all communities there is a stratum of vulnerability.  Youth aged 10 to 25 is that population."

Sonia teaches Te Mahi Whakatau practice-based learning across the social work degree and says her research has added value to her own tauira by preparing them to engage as a guest in the hearts and minds of others and not that of an intruder.

"A humanitarian heart beats with kindness and aro’a for people. I have a strong sense of social justice and I care about fairness and equality for people. These values and beliefs underpinned my decision to undertake my Masters."

As for Elias, he will graduate in September from Perth's Curtin University with a PhD in Social Work that explores the settlement experiences of migrants from India to New Zealand.

Elias says by going through his own "new country" challenges he was interested to know what could make integration easier and faster.

"My findings have contributed to the development of a framework to support migrants and refugees and has also given me more insights into the art of writing which I share with my tauira," he says.

"The lesson was if you waste time or your priorities are wrong, it will have serious consequences on your finances, health and family relationships."

He says good communication was also an important lesson he picked up, as he now looks forward to having the title "Dr." before his name - the second kaimahi to do so in the team for Te Ihu Takiwā.

Kaiwhakahaere Ako Celia Porter says she's extremely proud of her kaimahi who role model tauira success, as they provide excellent examples of how a rewarding a career in social work can be.

"This is a significant achievement and we would like to thank TWoA and whānau who have supported the journey along with way."