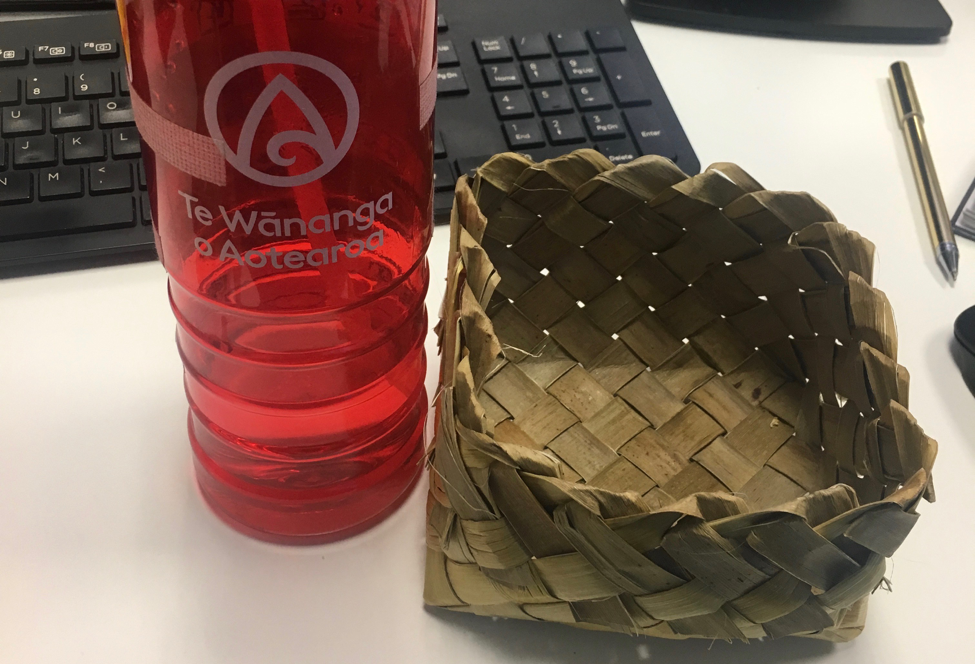 “We are helping reduce the amount of waste we have by making our kaimahi aware of what they waste and how much of it.”

In her office, around 20 staff have replaced their general waste bins with small konae that sit on their desks.

Alyse believes this initiative could work across all campuses with the premise being, people will think twice about what they’re throwing out when it’s put into a small handwoven flax basket first.

“There was a little push back initially but it’s just accepted now. I do think we can take to another level soon, to be aware of what type of rubbish we are bringing in.”

Alyse says there’s still a lot of opportunity to educate and develop understanding of the kaupapa though, and to be even better at it.

“We want to get to a point where we’re focusing on what we are buying or using first.”

Aukaha Kirimana Angeline McCormack from Matatahi Mataora says her office has also replaced their personal rubbish bins with kono baskets and are working closely with Para Kore to start recycling.

“We decided to do this as a trial for our takiwā to encourage a more sustainable and environmentally friendly approach to our waste. I live in Whaingaroa and it’s a community that’s strong on reducing waste, re-using and re-purposing, and trying to change the ‘throw-away’ culture.”

Angeline says this has influenced her thinking from home to the workplace as her biggest challenge has been keeping waste minimisation at the forefront while continuing to meet work commitments.

Also no-one liked giving up their rubbish bins at first, but overall the initiative works.

“I’ve seen kaimahi making the effort to recycle which is awesome. It has to become the norm and to do that there needs to be continued communication and encouragement for all to jump on board the Para Kore kaupapa. I’d love to see us become world-leaders in sustainable business practices and to embed waste minimisation across the whole organisation.”

At Raroera Campus in Te Rapa, Kāwai Raupapa kaiako Melaina Huaki started up a recycling system supported by her co-workers.

“I did a display of what the recycling numbers mean and then found some ipu that would help with separation.”

They take their soft plastics to the closest New World when someone gets groceries, and there’s a compost bin that’s emptied three times a week. Melaina says this has reduced the bin of general waste significantly and while there was some resistance to the changes, the initiative makes sense to most.

Environmental, Safety & Wellness Lead, Harata Samuel is proud of the initiatives taking place and the advocates leading the way and encourages more kaimahi to get involved.

“As we are in the final stages of putting our Environmental Sustainability policy in place, it’s heartening to know that our kaimahi are already taking action from the ground up.”