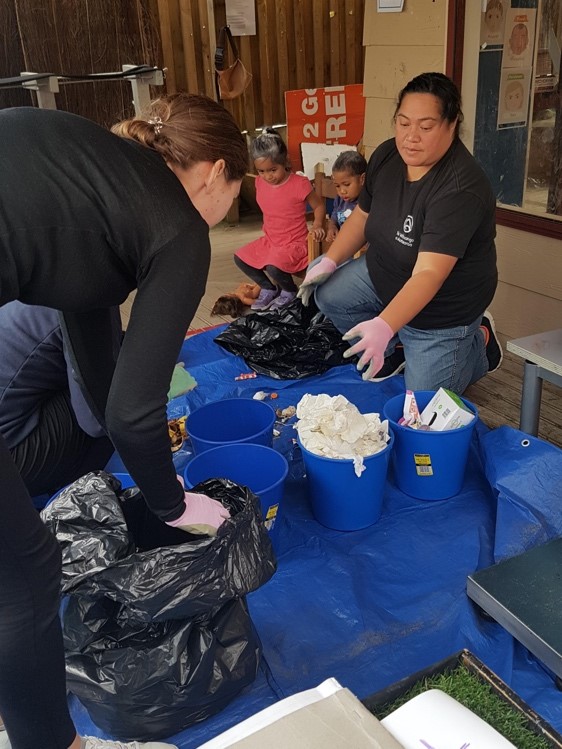 A cloth nappy trial at Nga Kākano o Te Mānuka in Māngere has proved so successful it will now be rolled out to other Te Wānanga o Aotearoa ngā Puna Whakatupu in Gisborne, Hamilton, Tokoroa and Te Awamutu.

TWoA Lead Early Learning Tracey Mansell says the decision to expand the initiative was confirmed following a waste audit by Auckland Council following the trial, which found overall waste was reduced by half when cloth nappies were used.

“We’ve decided to continue on with this kaupapa, which is very exciting.”

Ngā Kākano o Te Mānuka Puna Whakatupu trialled the cloth nappies for eight weeks and from that experience, they have bought their own bulk supplies through Auckland Council’s Waste Minimisation and Innovation Fund.

Auckland council Waste Wise co-ordinator Philippa-Rose Payne is encouraged by the decision to continue using cloth nappies and says the reduction in waste since the trial began is significant.

“Overall the centre is doing well. By switching to cloth nappies and putting more paper in the recycling bin they’ve reduced their overall waste by more than half," she says.

Further recycling and composting of paper towels would see the centre get closer to zero waste.

Tracey says feedback from whānau has also been favourable, with most indicating they are saving up to $20 per week.

“There are also whānau who have indicated further interest in learning or using cloth nappies at home, so those are both very encouraging results.”

The trial programme has operated successfully at other childcare centres around the Auckland region for several years in a bid to reduce the amount of nappy waste sent to landfill.

Tracey says the opportunity to help the environment was too good not to take up.

“Over the last year we’ve been working on setting up more sustainable systems. We’ve had a worm farm, we’ve set up better recycling systems and we’ve incorporated resources for tamariki to reuse or repurpose in their play,” she says.

“Taking part in the cloth nappy trial was a natural extension of this journey for us and supports the environmental sustainability strategy of Te Wānanga o Aotearoa.”