A year-long trial in the eastern Bay of Plenty harbour to replenish mussel stocks destroyed by starfish has been called a “huge success” by Waikato University Associate Professor and marine scientist Dr Kura PaulBurke.

Dr Paul-Burke worked with tauira (students) from Te Wānanga o Aotearoa in Ōpōtiki and the people of Te Upokorehe, Ngāti Awa, Ōhiwa Harbour Implementation Forum, NIWA and the Bay of Plenty Regional Council, to find a solution to restore the mussels.

They used traditional Māori materials including harakeke, tī kouka and kiekie to make mussel spat lines which float above the seabed, out of the reach of the 11-armed seastar pātangaroa, Coscinasterias muricata, a voracious predator of mussels.

“From the trial we learned that these traditional materials work as well as contemporary materials used for spat lines but they don’t have any detrimental effects on the environment,” said Dr Paul-Burke.

“We also found that we can relocate mussels, we can put them on the bottom of the harbour and they will reattach and feed. The problem now is how to manage the seastars from eating all the mussels so they can reproduce and grow on the bottom again.” 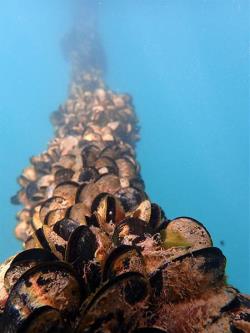 Mussels are vital for a healthy biodiversity in the harbour.

Each mussel can filter between six to nine litres of water each day improving the water quality in Ōhiwa, which is badly affected by silt and sedimentation.

Dr Paul-Burke said the group had received funding from the National Science Challenge, Sustainable Seas to begin a new four-year trial working with the University of Waikato MUSA Environmental.
The trial will look at why are there so many seastars and what are the options for managing them.

It will also look at how to retain the surviving mussels and the best places to restore mussels on the seabed as traditional beds have been all but wiped out.

“All of our mahi and our research is grounded in mātauranga Māori,” says Dr Paul-Burke.

“It’s been developed at marae and rūnanga with kaumātua and kuia. We ask the home people what they want to do and how. They bring their kete of intergenerational knowledge and combined with our kete of western science we have created a real-life mussel restoration project for our harbour, it is a team effort.”

Roka Cameron, who is a kaiako of Toi Paematua at Te Wānanga o Aotearoa in Ōpōtiki said tauira (students) made the spat lines as part of their raranga (weaving) study.

She said tauira would continue with their spat line production as part of the new trial.