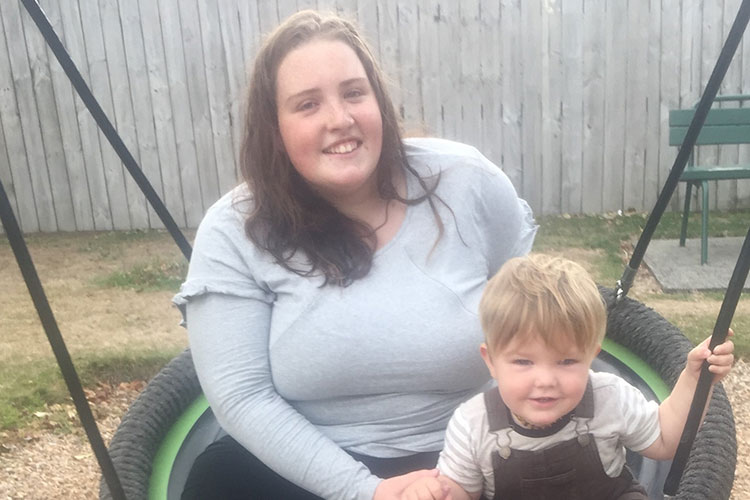 Italian poet Dante was famous for his vision of hell. Dante O’Driscoll from Patetonga is eyeing a far more rosy future, with help from the Waikato-based Youth Services team at Te Wānanga o Aotearoa.

Nineteen-year-old Dante (pictured above with her two-year-old son Carter) has just “graduated” after four years of working with the team.

Dante, Ngāti Pākehā, who used to be on a Young Parent Payment benefit, says she found Youth Services staff really good to work with as they gave her “guidance with what I was going through at the time”.

Besides regular catch ups with team kaimahi “I was able to just text when I needed support”.

Dante started working with Youth Services in 2016 when she dropped out of school with no NCEA Levels. She encountered a range of schooling and living difficulties after that, including having no driver’s licence or transport. Then in 2018 she had Carter.

Over the four years they have been involved with Dante, Youth Services have supported her to:

Last year, Dante enrolled at WINTEC where she is studying to be an enrolled nurse. She hopes to work in neo-natal intensive care with babies.

In the meantime, she’s working at Matamata Country Lodge, a facility caring for older citizens, meaning she is no longer on a benefit. She says a few years ago she wouldn’t have been keen on such a job but now “I love it”.

On top of that, Dante now has a restricted licence and a reliable car.

Says Carolyn: “She has found something she is passionate about and has a great routine and is able to manage all of this due to her increased confidence in herself.

“She has learnt from our budgeting support the importance of spending within her means and having a good credit rating.”

So how did a girl, who grew up in Morrinsville, get the name of a famous Italian poet?

“My mum thought Dante sounded more like a girl’s name. It turned out it means ‘enduring’. She had a difficult time while pregnant with me and giving birth, so she thought it a good name for me,” says Dante.

Given her progress with the help of Youth Services, that name and kaupapa certainly seems appropriate.