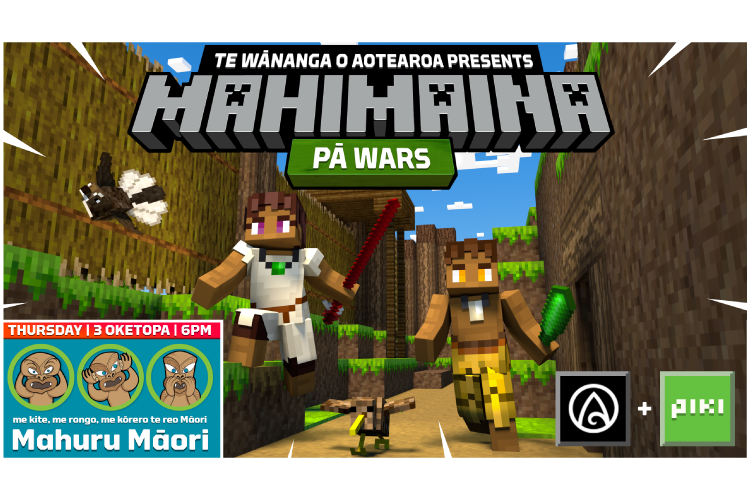 Two tribes are going to block it out in the world’s very first digital Mahimaina pā wars using the popular video game Minecraft.

Te Wānanga o Aotearoa is hosting a live match at 6pm Thursday 1 October, to preview Mahimaina Pā Wars (aimed for release later this year), and can be viewed via the Mahuru Māori Facebook page at www.facebook.com/MahuruMaaori.

“The objective is to build the best pā site, offering their iwi the mana and bragging rights for Mahuru Māori Pā Wars 2020,” he says.

“Each iwi will be given an hour to build their pā. In addition to building their pā, a tribe may choose to destroy aspects of the opposing tribe’s build to give themselves an advantage.”

“But this will come at the cost of the time they could put into building their own pā.”

Brendon says the stream of the Mahimaina Pā Wars idea came as a way of engaging more people in te ao Māori and learning te reo Māori “in a modern and contemporary way which reaches gamers and digital savvy youth”.

“Mate Karauna (Covid-19) has meant many planned events and engagements for Mahuru Māori had to be cancelled and this saw the development of the idea to create a digital world in which people could play, learn and explore together using their devices at home.”

Minecraft is one of the world's most popular games, with more than 126,000,000 active players worldwide.

Already a hot topic of conversation in the playground, Minecraft has also moved into the classroom, as teachers increasingly find ways to use the game for educational purposes.

Minecraft is often described as a ‘sandbox game’. This means that it’s a virtual land where users can create their own worlds and experiences, using building blocks, resources discovered on the site and their own creativity.

The game is available on multiple platforms. You can play on a computer, smartphone, tablet, Pi, XBox, Nintendo Wii or Playstation. It is growing in popularity day by day, especially among primary-aged children.