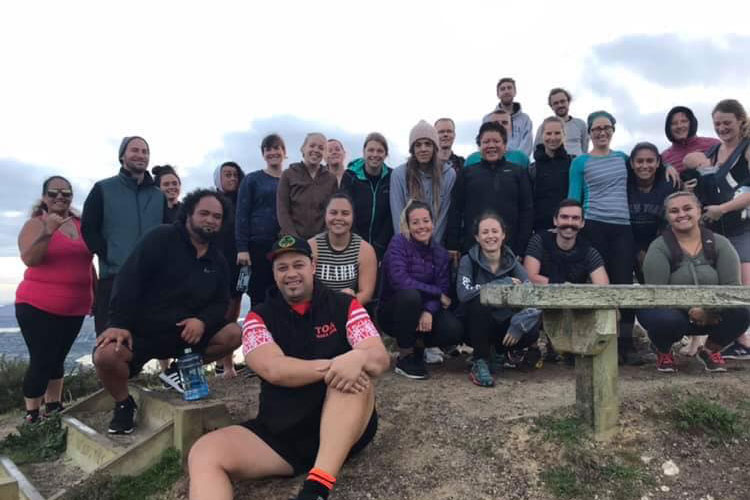 It started as a get-together for te reo Māori enthusiasts regularly catching up to share their two favourite things – kai (food) and kōrero (conversation).

There’s even talk of speed dating – in te reo Māori – and coaching for comedians, also in Māori.

“We call it ‘te parakuihitanga o te reo’.” says Mikaere Paki, a te reo Māori kaiako at Te Wānanga o Aotearoa in Porirua.“One of my friends came up with the idea for a handful of us to get together and have breakfast – basically we kōrero Māori, have a kai and get smart to each other. But when I rolled up with 30 people it changed the dynamics of the kaupapa (idea).”

The kai kōrero kaupapa quickly proved popular but the people taking part didn’t want their get togethers to end there.

“So we decided to have paparakautatanga o te reo as well, where we chose a pub and gave that a go.”

With a bit of eating and drinking going on, Mikaere and the group quickly realised they needed to do a bit of exercise.

“So we came up with Te hīkoitanga o te reo, the idea was we establish some places to go for a walk around them and to talk about their history and iwi connections throughout the walk.”

“We’ve walked up Mātairangi (Mt Victoria) where the peak is Tangi te Kio. There’s Rangituhi here in Porirua and over in Waiwhetu, we go for walks up Pukeatua and around Te Pito-o-One (Petone).Kai Kōrero is a rumaki (total immersion) space that caters for all capabilities. Mikaere leads the tikanga aspects of the group get togethers and creates the context with mihi (acknowledgements) and karakia (incantations) specific to each event.

“Over time we have embedded different tikanga and tuakana (senior) teina (junior) dynamics you’d have in there. If we have new people we surround them with tuakana who’ve been there for while.”

Like its growing number of participants, the kai kōrero kaupapa is on the move.

There are now kai kōrero get togethers in Porirua, Waiwhetu and the Wairarapa, where the group are involved with riparian planting to help restore the degraded Lake Wairarapa.

Given their love of food, the kai kōrero group is also building relationships with different cafes and restaurants.

“We started interacting with businesses and translating menus. There’s a café out near Waiwhetu Marae, where we go once a month and here in Porirua where we go at least once a month.”

“We’ve also established a relationship with Knucklebones in the Wairarapa and the Green and White ribbon café in Raumati.”

Mikaere says the kaupapa also includes karaoke competitions – where singers have to translate popular songs in to te reo Māori on the fly.

There’s talk about coaching for impromptu comedians in te reo Māori and even speed dating, picnics and when COVID-19 restrictions eventually lift, cruises around the Pacific Islands.

“What I’m absolutely committed to doing is having te reo Māori normalised and having tikanga as the moral compass throughout Aotearoa,” says Mikaere.

“You see te reo Māori Facebook groups but they’re often just names on a page. We have a community of 1500 people who are physically turning up to all of these events – and more than half of these people are Pākeha.”