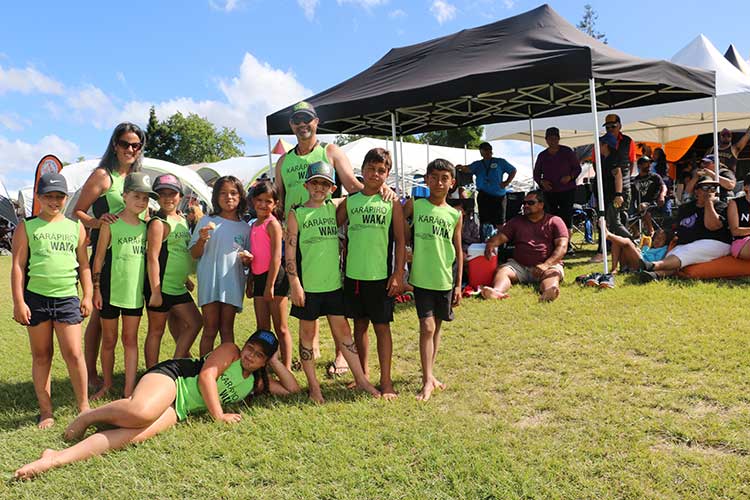 A fledgling waka ama club formed on the shores of Lake Karāpiro just three years ago has picked up its first ever medal at the Te Wānanga o Aotearoa national waka ama sprint champs.

The Midget W12 mixed boys and girls crew from Karāpiro Waka – formed by Ngāti Koroki Kahukura in 2017 – finished second in the Cup final on Monday, marking the first competition success for the club at its first appearance at the national champs.

The club was formed after regatta sponsors Te Wānanga o Aotearoa signed a memorandum of understanding with the iwi and ran its year-long Level 4 Certificate in Waka programme for about 25 iwi members at Lake Karāpiro, the venue for this week’s national champs.

Ngāti Koroki Kahukura – with marae at Maungatautari and Pōhara – are the hau kainga (home people) of the regatta.

Karāpiro Waka co-chair Lee Ann Muntz says the club was given two waka from Waikato-Tainui and had received massive support from Te Toki Voyaging Trust and others at the nationals.

“All the other clubs here awhi us,” she says.

With around 100 mostly young members, the club aims to grow slowly and entered four junior crews in their first attempt at the national champs.

The J16 W6 girls and boys crews gained good experience but were eliminated in the heats of their competition.

Lee Ann says much of the club’s early success is down to passionate coach Laurie Tauroa.

Along with training the junior crews, Laurie also stores the waka at his home and hauls them to and from the lake and their training venue at Epworth, further up the Waikato River.

“We don’t have a base so that’s what we’d like to achieve in the future and the future for the club looks very positive,” she says.

The club is also part of a push by Ngāti Koroki Kahukura to encourage iwi members to return home and Lee Ann says this is proving successful, with the recent opening of a 10-home papakainga at Pōhara Marae.

“There’re about 20 of our rangatahi living there now so it’s really beneficial.”

- The Te Wānanga o Aotearoa national waka ama sprint champs began on Sunday and run all week at Lake Karāpiro, finishing on Saturday. More than 3500 paddlers are taking part and around 10,000 people are expected at the venue.