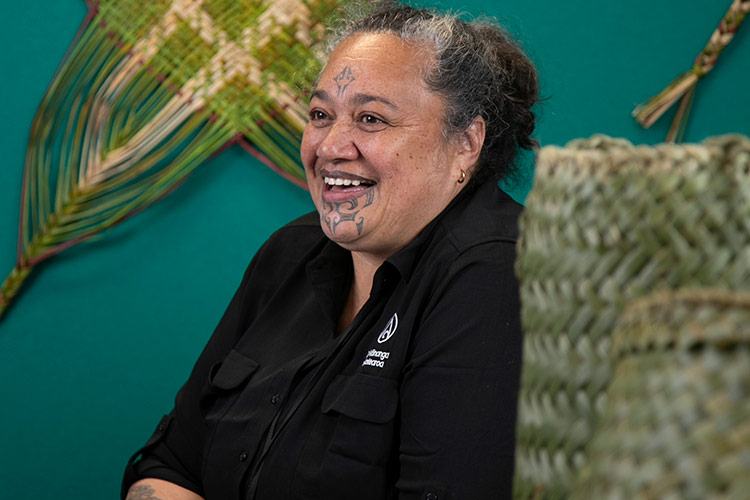 Jo Ngaia has learned from some of the best and is now sharing her raranga (weaving) skills on to others.

Jo is the kaiako of the Level 4 Kāwai Raupapa – Certificate in Māori and Indigenous Art raranga and Level 5 Ngā Mahi ā te Whare Pora – Weaving programmes at the Ngāmotu campus of Te Wānanga o Aotearoa and loves nothing more than passing on her 30-plus years of experience.

“We don’t own the knowledge, we’re just a part of that journey for our tauira and I’m just sharing what I love doing with others,” she says.

She has been teaching at Te Wānanga o Aotearoa for about 10 years but grew up at Parihaka watching her kuia weaving.

“Our kuia out there, especially our nan, would weave a kete from the harakeke in the garden so I’d just watch her, but I never really took a lot of notice because we weren’t always allowed to stay in the whare. Us kids had to go outside and play.”

“She took my under her wing, but she asked me lots of questions first, which was good. That’s where I began my journey with raranga.”

She later spent two years studying raranga in Ngāmotu before completing her degree under the tutelage of Kahutoi Te Kanawa at Te Kuiti.

Jo says she learned her teaching style from those who taught her.

“I learnt from very caring wāhine who took the time to show you and then if you ask a question, they took the time to explain. That’s the type of learning that I enjoyed and that’s how I like to teach.

“It’s meant to be enjoyable and fun and if it’s not fun you should reflect on why. You have to be in the right space, if not, it reflects in your mahi,” she says.

She says many of her students undergo significant transformations throughout the programme.

“They have more of an appreciation of not just raranga but of te ao Māori. I’ve seen some tauira, their transformation has rippled into their whānau life and changes that for the better.”

Jo says her Level 4 programme is achievable for anyone with an interest in raranga but says those who are passionate or who have done other handicrafts such as needlework have skills which come in handy.

“The advantage for them is that when we start to look at patterns, they can read the pattern. You have to be passionate about what you’re doing but you also have to be able to think on your feet. You need to really want to learn, not to just do it as a hobby because it’s a commitment.”

She says her biggest challenge is often managing the expectations of her tauira.

“When tauira come in I ask them what they want to achieve, and they always aim really, really high, so I just have to bring them back down to reality.

“Actually, you’re not going to do a korowai this year but I can teach you some techniques to help you get there. It is achievable however you’ve got to do the basics first.”

Find out more about our Toi Māori (Māori Arts) programmes.