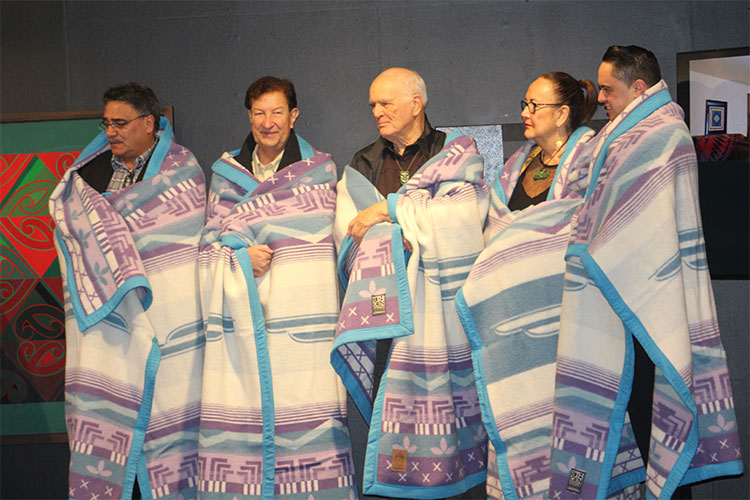 Hundreds of people gathered to acknowledge the work and career of one of our finest artists on Saturday with the opening of the Toi Koru – Sandy Adsett exhibition at Pātaka Art + Museum in Porirua.

The exhibition – which runs until November 7 – celebrates the 50-plus year career of Sandy Adsett, 82, who has retired after close to 20 years teaching at Toimairangi at Te Wānanga o Aotearoa in Heretaunga, which he established in 2002.

Sandy - Ngāti Kahungunu, Ngāti Pāhauwera - received formal art training at teachers’ college in the 1960s and his works have since featured in major national and international exhibitions.

In 2005 was made a Member of the New Zealand Order of Merit for his services to art and in 2020 he received an Arts Foundation Icon award, Whakamana Hiranga, which is limited to 20 living artists.

He is also recognised as an Adjunct Professor of Te Wānanga o Aotearoa and received an honorary PhD from Massey University in 2018.

Toi Koru features 60 works spanning the 1960s to today and is accompanied by the Ahi Toi exhibition, featuring the works of tauira he has mentored over the years.

They had organised the delivery of blankets for Sandy and several other arts luminaries - including Māori Co-leader at Te Papa Tongarewa Arapata Hakiwai, artist and friend June Grant, kapa haka veteran Trevor Maxwell and Te Pātaka director Reuben Friend, himself a Toimairangi graduate.

The blankets were co-designed by First Nations artists along with Tawera and Henare Tahuri. The recipients were wrapped in the blankets in a First Nations tikanga of honouring a person. Sandy played a key role in establishing relationships and the Indigenous Residency Programmes with Evergreen Longhouse Education and Cultural Centre in Washington State.

At the opening, Sandy  offered some sound advice for artists of all ages.