Right where he belongs 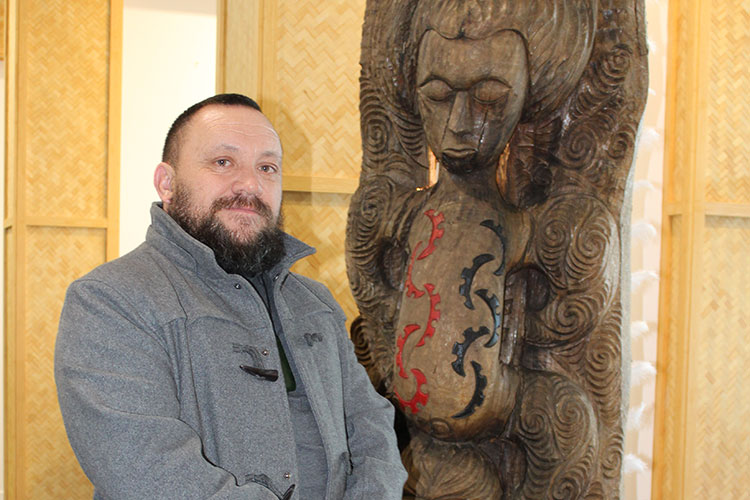 It’s taken a while but Mike Looker has finally found where he fits in.

After first coming to Te Wānanga o Aotearoa as a tauira wanting to learn whakairo, he went on to become a kaiako, taught in Whangārei for three years before returning to Tāmaki, where he is now a student support adviser at our Māngere campus.

“I didn’t care about any qualifications when I came here, I just wanted to carve,” he says.

He eventually completed the Maunga Kura Toi whakairo degree before teaching the Bachelor of Māori Art at Northtec. It was during this time that he began to notice some of the struggles his tauira faced.

“You can see where the gaps are. Some of them struggle with some of the simplest things. They’re skilled artists, but they struggle, they can’t write an essay and they were struggling with some of the things that some of us take for granted,” he says.

“I thought as a kaiako, I’d be able to go and help, but I it wasn’t as straighforward as I wanted it to be.”

Leaving teaching and moving back to Tāmaki to establish his own whakairo venture, Mike kept thinking about those tauira and lept at the opportunity when a Tauira Support role became available at the Māngere campus.

“When this job came up, I thought ‘oh yeah, that’s perfect’, that’s where I fit,” he says.

“That’s where I want to be, to tautoko the kaiako to build up these tauria so they can get to these places that they think they could never get to. Anyone can get there with a bit of encouragement.”

He sees two key reasons why many tauira struggle.

“I think one of the biggest things is that they come in and they already have a feeling that they can’t do it, even though they might be skilled as. They have this attitude that ‘oh no, that’s not for me’, or ‘that’s a Pākehā thing’, which it isn’t.

“The other thing is the academic stuff, because schooling wasn’t for everyone. And on top of that, you’ve got the struggle of finance, whānau, it’s just hard.”

Which is why he’s committed to doing everything he can to make it that little bit easier.

Find out more about our Toi Māori programmes.