The hard work starts at home 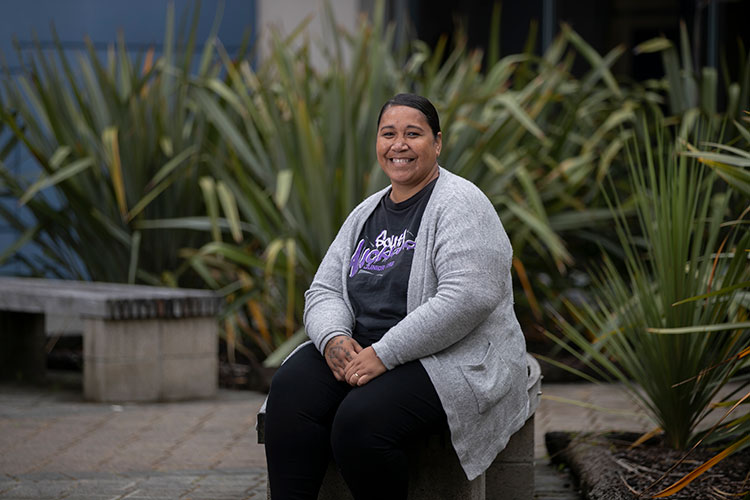 Working with young people in Ōtāhuhu, Elaine Poutoa has seen first-hand the issues they face.

And many of them are the same issues her own six children have battled.

Poverty, crime, bullying, homelessness, self-harm, Elaine has seen what it does to young people and wanted to do something about it.

“I’ve seen so much hardship out there for families so for me, I looked at how I can help people outside my own family, just be an extended family for them,” she says.

She was also aware she had her own issues to deal with.

“I’ve always been one of those short-tempered people and I thought taking the social service course would help me improve that, and it has.”

That course was the Level 4 Certificate in Bicultural Social Services ManaakI Tangata programme at the Māngere campus of Te Wānanga o Aotearoa and Elaine says it’s brought about massive changes in her life.

“I learnt a lot this year. I’m very proud of myself and I’ve seen the massive improvement within my own home,” she says.

Before the course, she was told by a family member it would take her back to her roots, but she didn’t really understand what that meant.

“He said ‘you’ve got to know where you’re from’ and I thought what does he mean by that. It wasn’t until I came and went through the course and now I know, and I know the importance of going back into your own background.”

She says one comment from her kaiako really hit home.

“She told us that there’s no point in coming in and trying to be a social worker to be able to help others when it should actually start within your own family. For me, that was the biggest lesson.

“I was always one to drop the f-bomb on my kids. I never had that proper communication between me and my teenagers because my girls felt uncomfortable to come and talk to me. They thought I would just turn around and give them the f-bombs.

“My daughters used to feel more comfortable talking to my sister, but not me, and I felt left out, but I had no one to blame but myself. It was how I did things that made them feel uncomfortable. Now, they feel a lot more safe to be able to come and talk to me.

“So that’s where we are today and that’s why I’m coming back to do the degree.”

Elaine says while that will be a four year journey, studying at Te Wānanga o Aotearoa has given her the belief to tackle the challenge with confidence.

“I want to be able to push myself to be a better person. I know I’ve improved but I want to become way better than where I’m at at the moment.”

She says the programme has given her far more than she ever expected.

“Coming to Te Wānanga o Aotearoa, I wasn’t expecting much to be honest. I thought I’d take the class and see how things go, but you know what they say, expect the unexpected.”

Find out more about our Social Services programmes.