Weaving the past, the present and the future through raranga 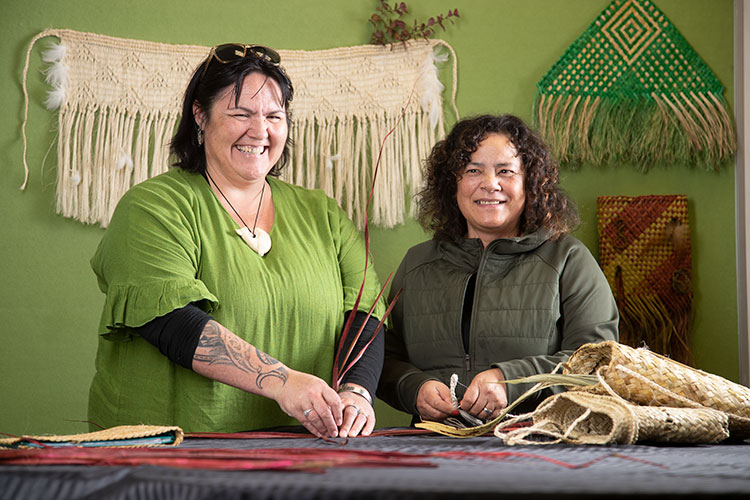 Maraea Peawini was eight years old when she sat intently watching her nanny weave a kete.

“I remember sitting on a mattress at the feet of one of our kuia (elderly woman) and being absolutely intrigued by how her fingers moved up through the harakeke (flax).”

“I’d ask her lots of questions about what she was doing. I was just so captivated and mesmerised.”

“Her hands moved so freely, and she created a little kete. I asked what it was for, and she said it was for the koha we would later present to the marae when we left.”

That experience for Maraea (Te Whakatōhea, Ngāti Porou, Ngāpuhi, Pākehā) planted a seed to learn more about the intricate art of raranga (weaving).

While committing herself for many years to kapa haka, Maraea would occasionally attend raranga classes learning the skills necessary to become proficient at the art.

It came naturally to her and was easy to pick up - but retaining what she’d learned when she went home was a problem.

“It was after the Christchurch earthquakes, and I was looking for a place to feel safe, and I also wanted a space to explore another creative outlet.”

They gain confidence in their study by completing practical projects and strengthening their creative processes by experimenting with different media.

Maraea recommends the programme to learn raranga and better connect with their whakapapa (genealogy).

“I would definitely recommend it. We get into little weaving groups. We attend kaupapa like Te Tiriti o Waitangi celebrations, and we share raranga with different people. We speak with people interested in weaving, and we always promote the course and the kaupapa of Te Whare Pora (House of weaving).

“What you get out of the course is a lot more than what you put in. It can be quite life-changing, really.”

She says raranga has given her a glimpse into what her tīpuna (ancestors) would have done in the past.

“There’s a physical aspect of weaving, a metaphorical aspect and a whakapapa aspect – you’re working with a resource our tūpuna were given from our atua (gods).”

“It connects you with the generations before us. You’re a part of it.”

Find out more about our Toi Māori art programmes.