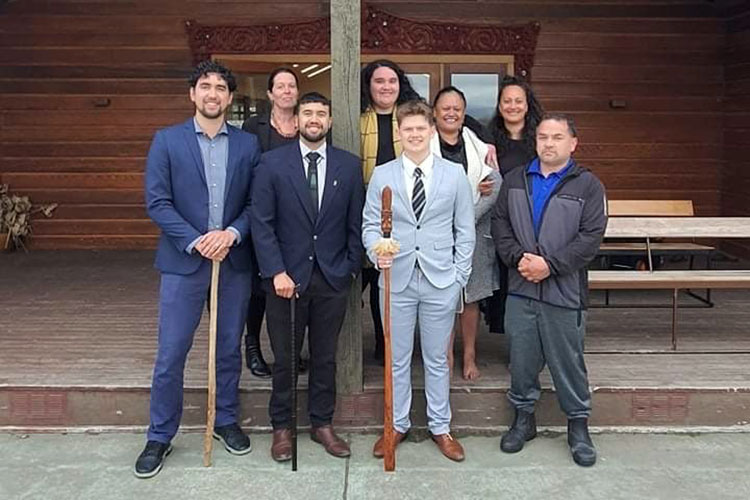 Te Pīnakitanga o te reo Kairangi graduate Nikau Reti-Beazley (Ngāpuhi), enrolled in the Level 7 Diploma in Ōtepoti to improve his grasp on te reo and what he discovered was not only a new extended whānau to practise kōrero, but also an opportunity to visit some of the stunning marae in the wider Otago area.

Nikau was in his final year of a Bachelors of Health Sciences majoring in Māori public health when his flatmate introduced him to Te Wānanga o Aotearoa in the bustling student town. He managed to fit the evening classes and noho weekends around his University schedule and says the mahi was all worthwhile.

“I loved the Wānanga style of delivery – everyone sharing and contributing, and I particularly enjoyed the noho weekends. That was great to see some incredible marae – Ōtākou, Arai Te Uru and Puketeraki. If it wasn’t for the course, I probably would never have visited those areas. I learned a lot at the noho, especially with the ability to conduct in our tikanga,” says Nikau.

The life-long learner says he credits much of what he has achieved to kaiako Keanu Ager who was consistently generous with his time and ensured classes were relatable, working to extend learning and made Nikau appreciate his background even more.

“He influenced me a lot with sharing his own stories and experience. One thing he pushed home was “Kia tika te reo”. He was a strong advocate for the language and we agreed on two big things – to make sure the reo is right and to constantly grow your vocabulary. Not to depend on a finite number of words to describe something but to really expand on that knowledge base,” says Nikau.

Hailing from South Auckland with roots in the far north, Nikau knows his whakapapa well and tikanga is particularly important to this dedicated supporter of reo revitalisation and health equity. He is no stranger to the hardships faced by parts of his community and so when the breadth of degree opportunities became clearer upon arriving in Dunedin, Nikau knew where his calling resided.

“I grew up in what people may call ‘the hood’. Some parts were real rough and I remember from a young age confronting a lot of that. I didn’t realise then the existing gaps in the health sector, nor did I know the reasons why Māori were not receiving the same health care standards in terms of consultations and treatments they needed. But I do now, and I’m working towards making a change for our people,” says Nikau.

“Having Māori values entrenched in me from an early age has helped me know what I wanted to do with mahi, and that was to help our communities. I didn’t want to be the ambulance at the bottom of the road, but to be involved in the prevention of these things getting any worse,” adds Nikau.

Today Nikau works for non-profit organisation Hāpai Te Hauora which addresses health challenges faced by tangata whenua. Nikau says his ability to translate kupu and statements from English to reo Māori has improved tremendously after completing the Diploma and this skill is useful in his mahi.

“It’s one thing to speak the language, but it’s another to translate accurately. We’ve been doing a lot of Covid-19 communications and I’ve been translating the pānui for our communities. It’s thanks to the great work of our kaiako and the resources that were available,”says Nikau.

He knows that he is fortunate to have had the kura kaupapa experience and a good understanding of Te Ao Māori before embarking on a high school journey at Auckland Grammar School. In some ways, the culture shock from that change helped prepare him for his student days in Te Waipounamu at the University of Otago.

“The change was similar to that change I felt when going into a mainstream high school from a full immersion background, but down in Dunedin it was the change in scenery – it was obvious I wasn’t in South Auckland anymore! But over the four years I was there I saw the number of Māori students grow and by the time I left I saw many more reo speakers,” says Nikau.

One tauira at a time, Ōtepoti Dunedin is diversifying and thanks to tauira like Nikau and kaiako like Keanu, Te Wānanga o Aotearoa is acheiving its goal of taking reo to the forefront of change.