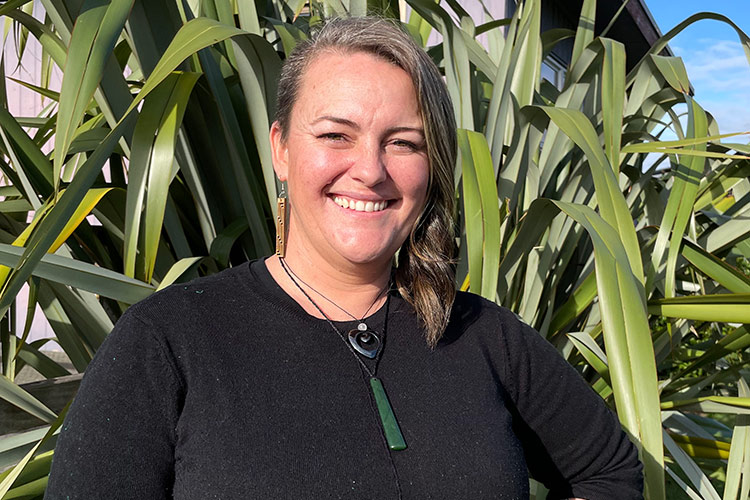 When Raranga kaiako Laurette Madden-Morehu recieved a kete as a seven-year old at a whānau reunion, it ignited a lifelong curiosity of mahi raranga.

Laurette still has that first plastic kete 32 years later, but has since woven kete of our own out of harakeke. Over the years she has also learned how to make kono, kete koha, kete papa, whiri kete and whatu. During her twenties and for her wedding, she made a full length kākahu using contemporary materials.

She admits despite dabbling in mahi raranga, she became more serious about the practice after studying on the Toi Paematua: Diploma in Māori and Indigenous Art (Level 5) programme in 2017. Under the tutelage of her kaiako Simi Paris (Ngāpuhi), Laurette gained a deeper appreciation for mahi raranga and whakapapa.

She explains, “It was then the connections between mahi raranga and our tūpuna were made. That has to be the biggest inspiration in my pursuit of raranga, connecting to my tūpuna and their mātauranga.”

Laurette adds that our tūpuna were so clever and ingenious, “When I learn the techniques, apply the patterns, or use the same materials, I am reminded that this mātauranga tūpuna is a blessing that I am privileged to enjoy.”

Laurette says there is so much to learn with mahi raranga. She is particular keen to learn whāriki after learning about a whāriki her mother made with others for her marae. The whāriki is now 20 years old and Laurette hopes to be help repair the taonga as a tribute to her late mother’s memory.

“To be able to put my hands on the same mahi as my mum, and to add to its longevity, so it can make it to the next generation, is something I aspire to achieve,” she says.

Laurette encourages others to pursue their own raranga journey. “Raranga has given me some amazing opportunities in life. For example, creating mahi for different kaupapa such as pēpi moenga or maaro for kapa haka. I’ve even been blessed enough to have some of my kākahu end up overseas.”

However, it is in her current role as a raranga kaiako in Hamilton, that she enjoys the most. “To be able to share with my tauira the whakapapa of our mahi tūpuna, and to see the awe in them that I experienced as a tauira is such a beautiful full-circle moment.”