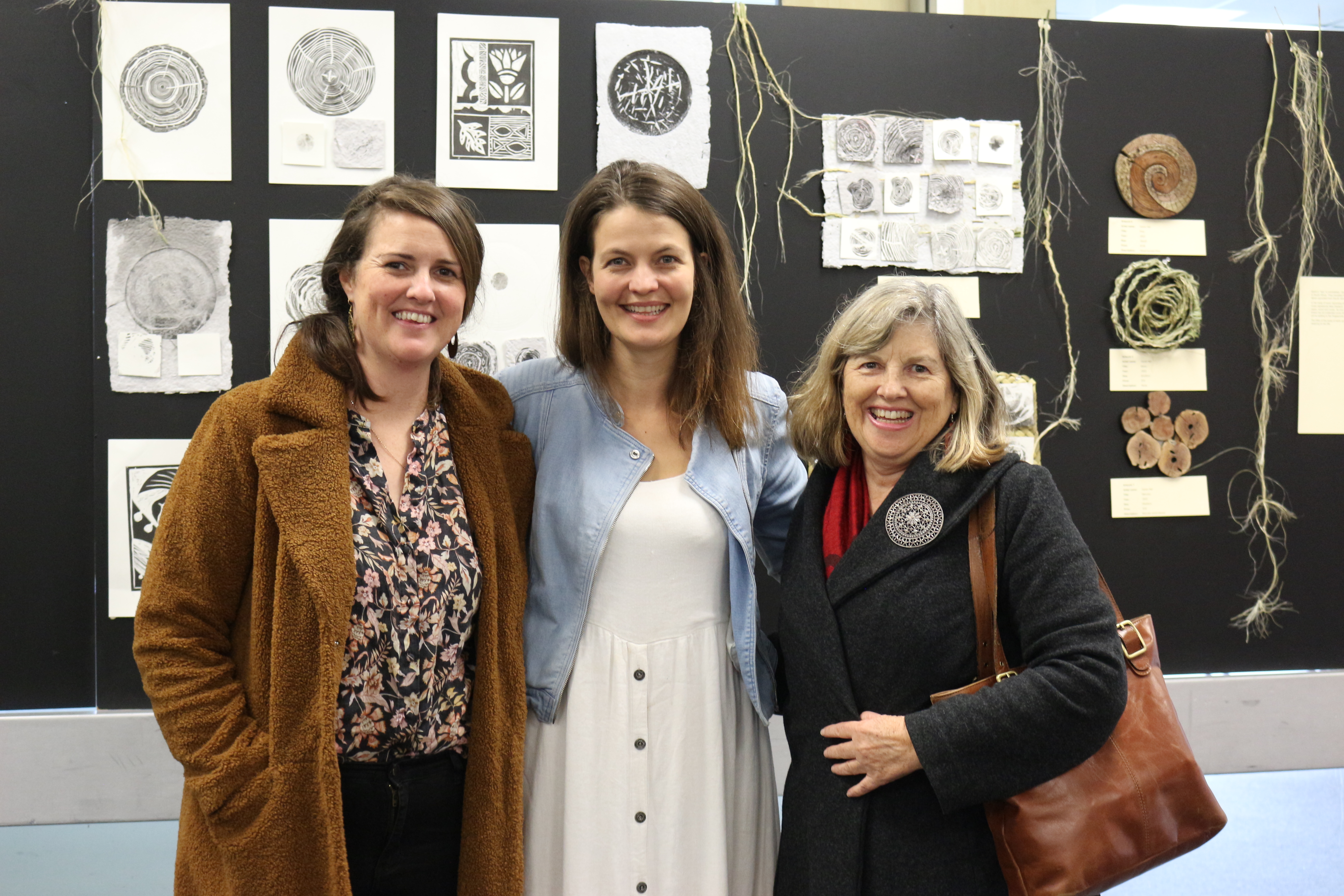 Karen (centre) with friends Jane Martin and Jenny Imrie at the exhibition opening.

Karen Nel ventured onto the Toi Maruata course in Porirua to explore indigenous arts in this part of the world and found out more about herself in the process.

The fine arts graduate from South Africa thought it would be fun to delve into art again and discover her new country of residence by studying toi Māori. She wasn’t expecting to uncover so much about her whakapapa but says the opportunity for self-reflection was welcomed whole- heartedly.

“I feel like it was a very personal journey. I found out my ancestors had moved from France and didn’t stay in one place – it seemed everyone was constantly moving! It was nice to reflect on this nomadic lifestyle and realise it wasn’t so different to me emigrating to New Zealand to find a new home for myself and my children. It made me feel proud that I was somehow carrying on a tradition,” says Karen.

Leaving your home behind and settling somewhere foreign is commonplace for many New Zealanders, including Te Wānanga o Aotearoa tauira. Karen says it’s always hard leaving whānau but through the process of digging into her whakapapa she found inspiration for her mahi toi, as well as reconciliation within herself. 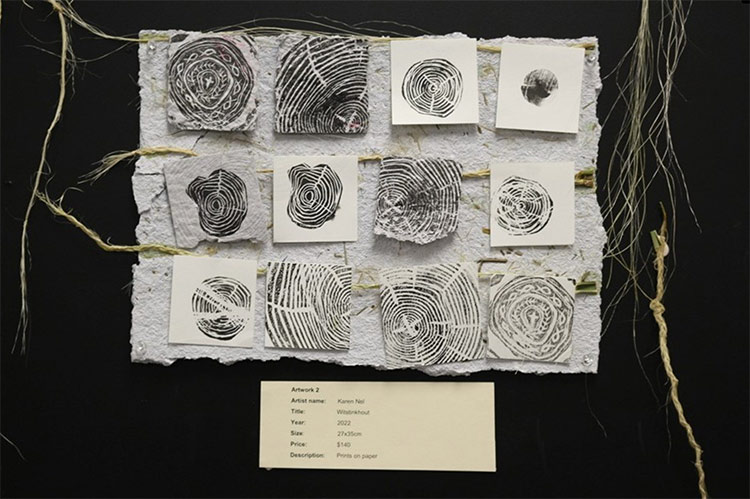 “There’s always been a sense of guilt for leaving whānau behind and coming here - that feeling of being ‘cut-off’. But there has been generations of my family that have done the same thing, so in a way this was sort of like
therapy for me, reconciling with my decision. In the process I’ve rediscovered parts of my identity,” says Karen.

For the end-of-course tauira exhibition entitled ‘Toi Aroha, Toi Manawa’, Karen put up a series of work named after trees. It was a collection of prints featuring ornate tree
rings on handmade paper, entwined muka fibre and free- hand motifs burned onto sections of wood.

“My parents were really into nature and growing up I knew all the trees around me. When I arrived here the trees and nature was unfamiliar, so I had to learn what the trees were. This was the inspiration for my work – when you move to a new place you need to be like a tree and think about replanting yourself somewhere else,” says Karen.

“So I investigated what materials are out there in this new environment I was immersed in. Discovering muka and learning how to work with it from my classmates was really inspirational,” she adds.
The Toi Maruata programme involves exploration into your whakapapa and an introduction to the many facets of indigenous toi. Karen says she appreciated the freedom in which kaiako Jack Kirifi encouraged exploration and growing skills at your own pace.

“We got to explore different artforms at the beginning. There were no rules – usually with things like printmaking in the arts, there are so many rules. But what I enjoyed about how Jack guided us was to explore without boundaries,” Karen says.

Karen shared her experiences with her children and was thrilled with the way they took to the new learnings she imparted.

“I just love that from this experience, my kids now know about muka and some of the traditional means Māori had to do things. They understand that you can take something from nature and find new ways of applying it to be useful. You wouldn’t believe the things my daughter thought up on how to use muka!” she laughs.

Seeds were being laid throughout the course that culminated into Karen’s final work. She said the process of trialling new mediums and styles, picking and choosing those to carry on with and disposing those that weren’t working, was a process that benefitted her.

It was a process of growth that doesn’t compare with anyone else’s. It’s your own journey, and you have to remain open to let the process flow. I’m happy with what I’ve
produced, but it was the process that was the real lesson,” she adds.

What was initially intended to be an escape from the mundane eventuated into an experience Karen will hold dear. As a single mom, she says it was nice to have the sense of being taken care of for a change. By enrolling with Te Wānanga she stumbled across a safe zone of a caring and supportive environment that will be the driver for her to return next year and further her toi exploration.

Find out more about our Toi Māori (Arts) programmes or how to enrol into Toi Maruata. 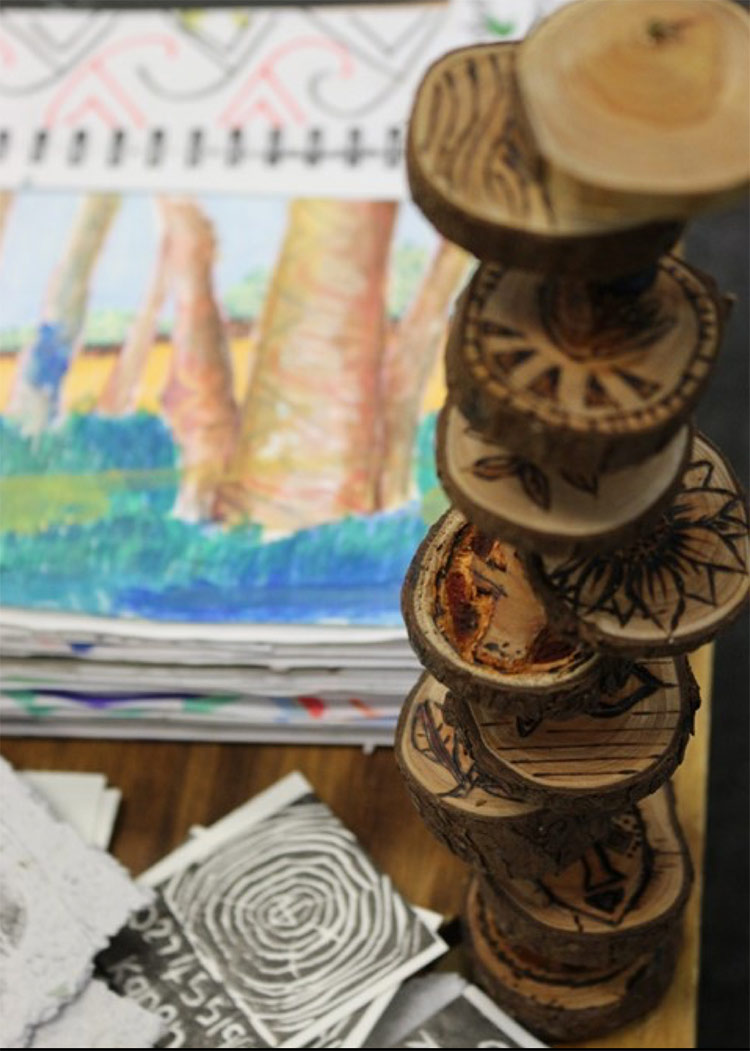