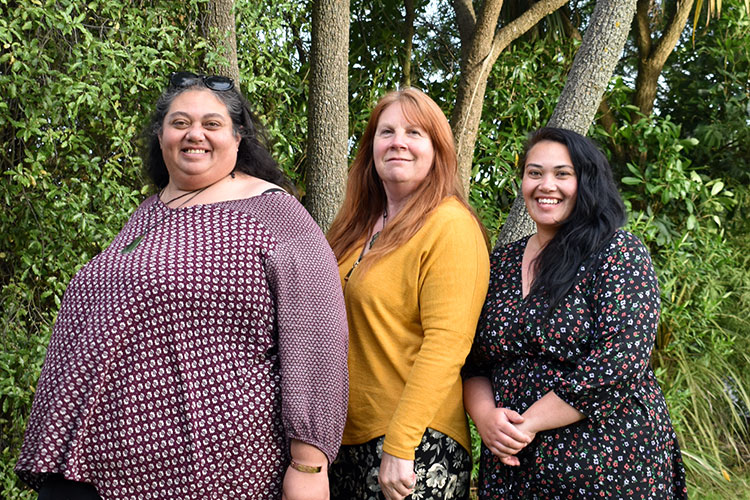 The seed of Kahu Collective was planted back in 2013, when Lisa Harding, Cathy Payne and Corabelle Summerton crossed paths during a Women’s Expo, at a stall showcasing Te Wānanga o Aotearoa Toi programmes.

“It’s a lifelong pathway. It’s never going to be just a couple of years at Te Wānanga o Aotearoa.”

Not only did they learn the art of Raranga (weaving), but they also made some surprising connections of an old sports manager, an actual Nan and whakapapa (genealogy) linking to just five minutes down the road.

“Weaving gave us an outlet to reconnect with so many aspects of our lives.”

They have learnt from weavers from all over the motu, including Ōnuku in Akaroa, Takahanga in Kaikōura, Arahura in the West Coast and Ōraka Apirama in Colac Bay. Not to mention the kaiako who have taught them at Te Wānanga o Aotearoa, including Morehu Flutey-Henare (Nanny Mu), affectionately described as a walking encyclopaedia.

This learning began to shift purpose when a commission from Ngāi Tahu, workshops for early learning centres and a demand for their exceptional work began rolling in. Beginning with markets and facilitating workshops, in 2021 Kahu Collective opened their shop and studio in New Brighton. They are now building a network and sharing the art of raranga with the community.

“Imagine if one day, something we create ends up in an archive, or gets seen  in100 years. How good is it to be able to tell a story about who we are and what we were doing?”

"Thank you to all of those we have learnt from, and we will continue to share our knowledge with future generations."

Find out more about our raranga and toi Māori (arts) programmes.