TO READ THE MAORI VERSION OF THIS STORY CLICK HERE

Think of the islands of Hawaii - what is it that you imagine?

No doubt you see golden or white sands, people surfing and some coconut trees swaying in the gentle breeze from the clear blue ocean.

Kaho'olawe is not like that, it's barren, it's dusty, the beaches are rocky, the waters are turbulent, furthermore, there are no hotels, no shops, no power, and no people. Despite that, I'm not saying it lacks in beauty; one significant thing that is there, is spirituality, and this is why we of Te Matapunenga[1] went to that land.

In ancient times, the indigenous people gathered in Kaho'olawe to pay homage to their gods, and they conducted these rituals at the sacred sites where altars still stand there today.

A shift in times saw the decline of these practices,  eventually the Hawaiian islands were seized by the American Government, and later the sacred island of Kaho'olawe in the years of the 40's was used by the U.S Navy as a bomb testing site.

Mongrels! Fortunately a group of activist rose up forty years ago, they fought to have the control over the island returned to the Maoli (indigenous Hawaiians), subsequently, in 1990, bomb testing ceased, and, the island was obtained by the Maoli.

One reason the island was returned to them was described in the indigenous peoples case, where there needs to be a place where they stay true to their customs and conduct rituals to the gods. Lono is one god that is faithfully honored during the months of Makahiki; this is the time when the traditional Hawaiian new year is celebrated.

From that time, year in, year out, this small group focusses on conducting those practices regarding Makahiki. Consequently, we were very fortunate to have the opportunity to witness their practices and their ceremonies to the god Lono, who we māori refer to as Rongo. However, when you go there, you must swim! Not just yourself, but you have to swim all your items across, enough for a six night stay for forty people; clothes, tents, sleeping bags, food, and fresh water (because of the bombing there is no fresh water on the island), food offerings to the gods (for the ceremonies at the sacred altars), and all sorts of other stuff, all must be swum, from the boat, across to shore.

Taking that into consideration, you must be focussed on the task at hand, you have no business being there, if you're not true to the purpose of your being there.

Yet, you might ask us, 'what are you Maori doing over there?', aside from observing, we were also there to take in what we saw, what we heard, what we experienced alongside our distant relatives of Hawaii and how they worked, believing that that would inspire us to revive the old Māori practices to Matariki.

Let me tell you, that one of the practices of the Maoli people, is the umu tapu (sacred oven), and, you can see the similarities to those of our Māori practices for Matariki, I'll leave it there for now as a clue to what might be in store in the coming days.

I can't summarise all that we did in this article, it would constitute a novel, but, let me say this, have patience Māori, we will see the fruits of this very auspicious excursion.

That'll do for now, but, I must acknowledge the people who welcomed us, took care of us and protected us, our gratitude is never ending, to you our whānau, there will be a time when we will return, and a time where you will be invited to come and be with us. 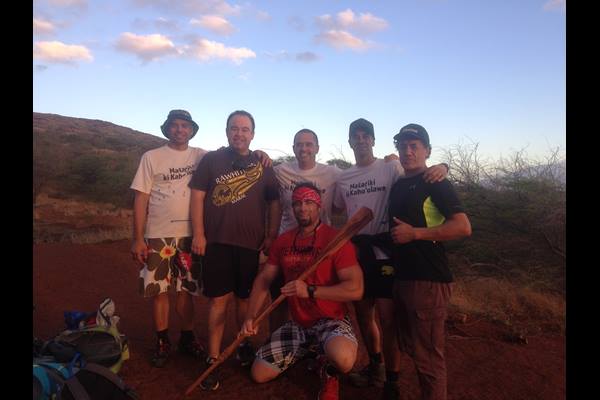 [1] Te Matapunenga is a group focussed on ancient Māori invocations, instituted by Professor Pou Tēmara and Dr Wharehuia Milroy five years ago. The apprentices are all graduates of the first to the sixth intake of Te Panekiretanga o Te Reo.