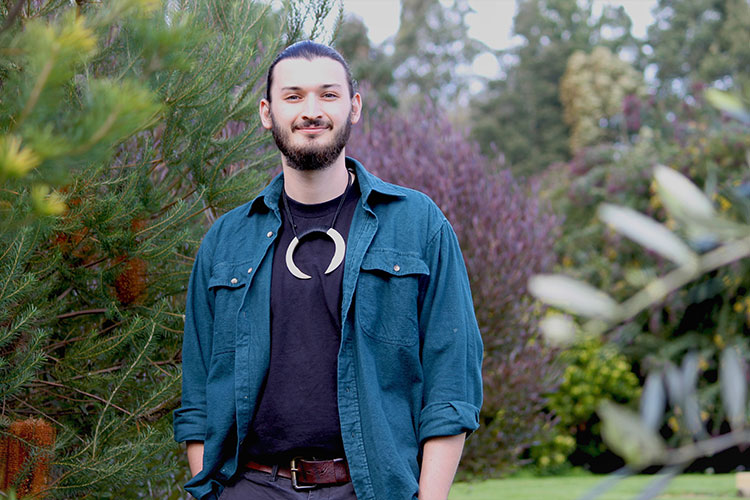 Originally from Austria, 24-year-old Julian Svadlenak has been on a mission to learn te reo Māori for the past 3 years.

Julian discovered his love for te reo Māori in 2019 while working as a security guard at Te Wānanga o Aotearoa (TWoA) and began his journey after speaking with the kaiako (teachers) during his shifts.

“The view points or the whakaaro Māori resonated with me and made me feel at home. I feel very comfortable and natural in it,” says Julian, who moved to New Zealand in 2013 with his parents and sister.

As well as his law degree, Julian credits his reo Māori studies with helping him secure his current job as a policy advisor for Waikato-Tainui.

His mahi (job) has also given him the opportunity to expand on his reo Māori knowledge.

“I’ve been really lucky in my environment. I’ve had people around me that I can practice with at both university and mahi. As well as my deep passion for te ao Māori and te reo Māori.”

As part of Mahuru Māori, Julian has made a commitment to speak only Māori for the first half of the day, with the exception of some work hui (meetings) involving external people.

Julian’s motivation to take up the Mahuru Māori challenge came from his desire to normalise te reo Māori being spoken all throughout Aotearoa.

“The more it’s heard, the more it’s made normal. We should make a considered effort because the more we do it the less likely it will be a māngere thing to fall back into reo Pākehā.”

Through the help and support of the TWoA kaiako, Julian is confident he will continue his reo Māori journey and begin a Level 7 Diploma in Te Pīnakitanga ki te Reo Kairangi next year.

“The kaiako have been very patient with all the tauira, accommodating to what each tauira needs. So even if you have a higher skill level, they will still challenge you,” says Julian.

He is hopeful that more people will take up the opportunity to learn te reo Māori, including his own parents.

“If you want to learn, there’s never a wrong time to start. Just a kupu (word) a day goes a long way if you think about it. 365 days in a year, you’ll know alot of kupu at the end of it.”

Find out more about our te reo Māori programmes.