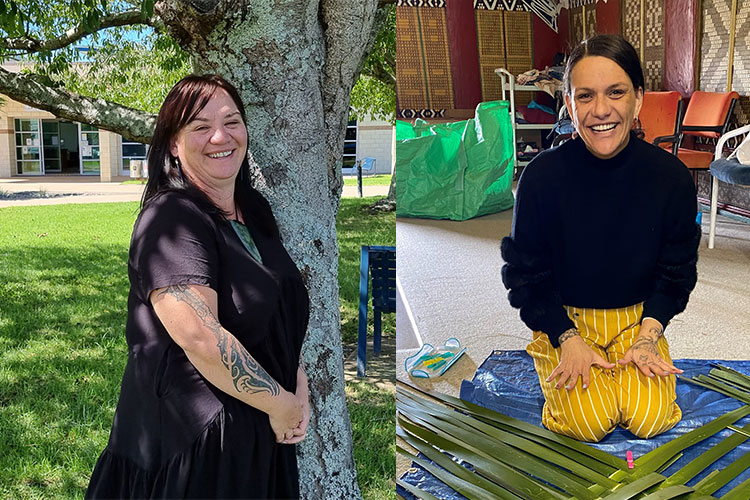 The certificate in Rongoā, traditional Māori medicine, was first offered at Te Wānanga o Aotearoa’s Tauranga campus in 2020 and this year they will also be offering the diploma.

Alice Perry and Geraldine Kurukaanga are two tauira (students) who are enrolled to study the level five diploma after they completed the level four certificate which they both said opened their eyes to a whole new world of learning.

“I found the programme amazing, it was life changing and more than what I expected. But there’s so much more to learn, I feel like I’ve only hit the surface and I want to delve deeper,” says Alice (Te Uri-o-Hau and Ngāti Whātua).

“I want to add more to my kete (basket). I’m going in with my eyes, ears and mind open. Rongoā encompasses so much and we’re lucky to be able to continually learn and upskill,” says Geraldine (Ngāti Tūwharetoa and Ngāti Hauā).

For mum of five, Alice, the rongoā programme has been about more than just the study of Māori medicine but it has also been a journey of growth and discovery in her self-identity.

“The programme helped me to find a deep sense of connection to my own whakapapa (genealogy), to the whenua (land) and my own sense of belonging,” says Alice.

Both Alice and Geraldine started out their rongoā journeys in the hope of being able to help and support their whānau.

Alice’s interest was piqued during one of her pregnancies and she wanted to use rongoā during that time and for afterbirth care.

While Geraldine used rongoā as an alternative method to helping soothe her young daughters’ eczema. From there both women went on to study with TWoA and haven’t looked back since.

“Everything that I’m learning gets written down and shared with my daughter, so I know it’s going to be passed down from generation to generation. Whilst you think at the time you’re going in to do it for yourself, you’re actually doing it for the generations to come,” says Geraldine.

The Diploma in Rongā will be taught by kaiako, Awhina Motutere who both Alice and Geraldine have already studied under and were looking forward to being taught by her again.

“Awhina has so much knowledge to give and it’s exciting to be in her class. She opened up a whole new world to all of us tauira,” says Geraldine.

Find out more information about our rongoā Māori and hauora programmes.